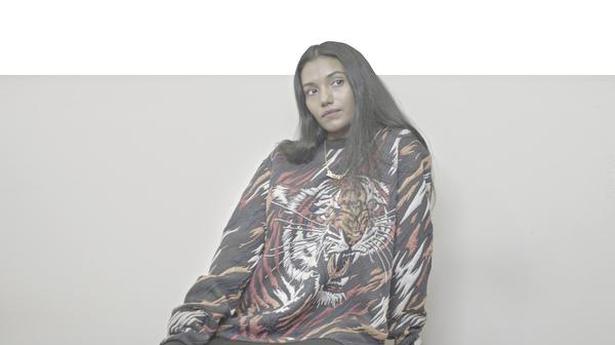 In Gully Boy, directed by Zoya Akhtar and starring Ranveer Singh and Alia Bhatt, there are several intense rap battles, between the underground artists, driving the film. During the first of such scenes, there’s a fleeting glimpse of a young woman cheering on the two battling artists. The only woman in that crowd, 25-year-old Deepa Unnikrishnan, is a rebellious and feminist rapper, better known as Dee MC.

Dee MC has been performing rap music for the last seven years. Her journey into rapping and hip-hop began at 19 when she developed an interest in writing lyrics. “I like keeping the story-telling factor in all my songs, which gives a vivid imagination to the listener,” she says.

Her lyrics shed light on the issues that women in this country face, which comes from her personal experiences. While living with her family in Kalyan, Dee MC struggled to leave her home late at night to perform at venues far from home. She has also faced discrimination in the industry, where she struggled to be taken seriously. “I’m not undermined per se but I am overlooked,” she reveals. Dee MC’s reserved nature is of little help. “Fans are hesitant to approach me and think that I could be arrogant,” she confides. “Everyone may not have the same level of confidence to approach a girl.”

For women, by woman

Taking her messaging forward, Dee MC’s latest seven-track album, Dee=MC2 released on October 30 this year, across all streaming platforms. She worked on this album along with a UK-based music producer, Sunit Music, during her international tour in 2017. Mumbai-based artists such as MC Altaf, D’Evil and Sense One Way have collaborated with her on the album.

Dee MC is particularly fond of two songs in the album: Rang and Vadhaiyaan. While Rang is about brown skin prejudice, Vadhaiyaan explores how fragile the political and social environment in the country is. Through Vadhaiyaan, Dee MC talks to the women of the country asking them to take advantage of the feminist movements and to talk freely about their struggles.

Dee MC believes rap music is experiencing a golden time in India after Gully Boy. “We’ve been waiting for a movement where the entire country would pay attention to hip-hop,” she shares. While she may have cracked the space, she has a word of advice for those starting out. “Whatever you’re trying to start in your life, only do it because you want to. If you’re doing it to seek validation it’ll give you a lot of mental problems,” she cautions.

Dee MC will perform with artist Poetik Justis at G5A Foundation for Contemporary Culture as part of the Indie Music Thursday’s event at 9 p.m. tonight.

The 74-year-old actor said he is asymptomatic and is doing “absolutely fine.” Source Related

Box office results notwithstanding, Mandira Bedi, 47, has made her presence felt in her recent films. Making a smooth transition between different platforms, Mandira was recently seen in “Smoke”, a crime thriller and is now portraying the role of boss in the second season of MX Player’s “Kiska Hoga Thinkistan” which reflects office politics, professional […]

It might seem like tokenism to première a production on World Theatre Day, but Krishna Kumar S (KK) has been doing this for the past 21 years. As March 27 rolls around, the artistic director of city-based Masquerade is busy with rehearsals for Antigone, derived from Sophocles’ play written around 441 BC. “It is one […]