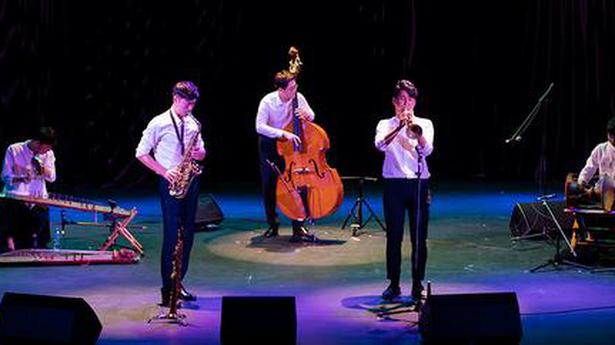 Korean band Seum is in the city, bringing with it a taste of traditional Korean music. The band will be performing today in celebration of the fifth anniversary celebrations of The Consulate of the Republic of South Korea.

“We believe in creating new sounds by melding traditional Korean instruments like the gayageum (a 12-string instrument), and janggu (an hourglass-shaped drum) with Western instruments such as the saxophone and the trumpet,” says Joon, also the music director. He adds that the the music stills retain a rhythm structure unique to Korea.

Having played together for 20 years, the group has participated in a number of concerts around the world, in countries such as the US, the UK, the UAE, Nigeria, Algeria and the Azerbaijani Republic.

At the show, you will also get to hear similarities between Korean and Indian music.

“The emotional mood set up is a distinct similarity between our countries,” he says. “All our team members love Indian instruments, particularly the sitar and the tabla. The tabla requires a special technique and a sensitive touch. Furthermore, the sound is deep and it touches the soul of human beings. The soft and sentimental engagement is an important aspect that is common to both Korean and Indian music.”

Moreover, much like in India, in Korea too, traditional music is booming again, thanks to creative experiments by young musicians who are open to collaboration with different kinds of music from around the world, says Joon.

The show is on April 9 at Sir Mutha Venkatasubbarao Concert Hall, Harrington Road, from 7 pm. Entry is free.

Five adventurous podcasts for the vicarious traveller during the lockdown

Be it academic analyses of historic landmarks or blunders happening during journeys, these podcasts will feed your aching wanderlust Source Related

Opposition parties including the Congress, the CPI(M) and the CPI, have approached the Election Commission (EC) seeking the postponement of the release of a biopic on Prime Minister Narendra Modi until the last phase of voting on May 19 is over. The film, PM Narendra Modi, is scheduled to be released across the country in […]