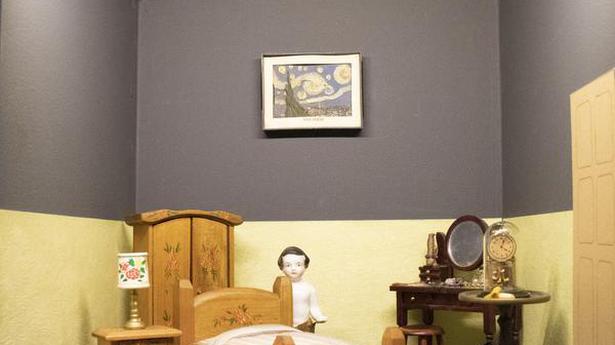 Somewhere along the meandering course of language, a 19th century English idiom turned turtle. “God is in the details” became “The devil is in the details.” The two versions, naturally, imply opposite meanings with ‘god’ signifying effort and truth and ‘devil’ signifying obstacles and difficulties. The inversion may have been simply a result of playful irreverence or a reflection of a general loss of faith in society. Whatever the case may be, the keyword is clear: detail. It is this human penchant for detail that has inspired the ongoing show, Small Matters: An Exploration in Miniaturisation, which delves into the fascinating world of miniatures.

Curator Joyoti Roy says this show celebrates the science and the arts, and shows how they are linked, “Historians believe that miniaturisation is a sophisticated thought process in our brain, so you see examples from 10,000 years ago until now. Shrinking something not only makes it charming, but also presents a design challenge to the human brain as it did in the microlithic period when we made mini tools, as we did in the 12th century when we made pop-up books, as we did a few decades back when we made the microchip.”

Roy is clearly excited about the project supported by the Hemendra Kothari Foundation, that she has co-curated with Pratik Aroskar and Siddharth Waingankar. In a bid to marry creativity with exhibition design, Roy has also involved object theatre artists, Sananda Mukhopadhyay and Choiti Ghosh in the installation of the works.

Across the world there are entire museums dedicated to miniature art. Some of the best known ones include: A World in Miniature Museum in Carlisle, England; Miniatur Wunderland in Hamburg, Germany; Miniatures Museum in Taipei, Taiwan; Gulliver’s Gate in New York and The National Museum of Toys and Miniatures, USA. Closer home, we have Shankar’s International Dolls Museum in Delhi, Joshi’s Museum of Miniature Railway in Pune, and even a Miniature World Museum in Lonavala.

Museums collections are usually built from serious artists and ardent collectors. Dr. Anita Rane-Kothare, department head of the Ancient Indian Culture, St. Xavier’s College is one such collector. Rane-Kothare has loaned some pieces from her collection for the ongoing show. She says, “We didn’t have Barbie dolls in our childhood, but I was fascinated by the traditional doll houses and the small things inside it. I would save my pocket money to buy silver miniature objects. My parents also encouraged me to buy small artefacts. That started me on collecting and creating a Lilliputian world, which would give me solace from the banality of everyday life.”

Passionate collectors like Rane-Kothare are often be part of organisations like the World Federation of Miniaturists, the Australian Society of Miniature Art, or The Miniature Art Society of Florida, that help define, network, teach, support and organise exhibitions for fellow miniature enthusiasts.

But long before these ‘Western’ definitions were formulated, artists in royal Indian ateliers were practising the art form with their own code. Most of us are familiar with the tradition of Indian miniatures that came from Mughal, Bengali, Rajasthani, Deccani, and Pahadi courts. The CSMVS itself has a dedicated gallery of miniature paintings.

But for this exhibition, the museum’s focus has been different, with the spotlight on the 3D art of sculptures and figurines instead of their much vaunted 2D counterparts. Portable shrines, toys, tools, intricately carved sculptures form the repertoire here. Indian examples include the Chaitragaur decorations depicting miniature domestic objects and the Qilla making on Diwali in Maharashtra, Nativity Scenes of Jesus Christ and the decoration of Golu dolls in Tamil Nadu. Notable foreign-origin exhibits include an elaborate model train exhibit of American origin, a European dollhouse with painstaking details, an ivory and wood Italian sculpture of a fortune teller and Japanese Hina dolls. The scale of the objects notwithstanding, these are rife with artistic, cultural, symbolic and historic meaning. It is impossible to not get drawn in by the promise of their secret stories and be overawed by their impossible details. And who knows what you may find while peering at one of them through a magnifying glass – god or the devil.

Small Matters: An Exploration of Miniaturisation is ongoing at the CSMVS, until October 31.

At her sea-facing house on East Coast Road, Ramya Krishnan is flanked by a small group of assistants and team members from the Super Deluxe team, setting up for a promotional shoot. “I am a big fan of Padayappa. We watched it at a house party recently,” offers my colleague, shyly. “Really? You watch Padayappa […]

Up above the ground so high

The Maximum City holds a plethora of secrets, swarming in between chaotic lanes, and quiet ones, in homes, and on the streets, above the ground, and beneath it. In 1932, British archaeologist, K.R.U. Todd, discovered a microlith — a small stone tool shaped by human hands thousands of years ago — in Backbay Reclamation. As […]

The importance of Saat Hindustani and Bachchanalia

Perhaps recalled by only die hard fans as the answer to a trivia question not likely to be asked on Kaun Banega Crorepati, is a patriotic saga that launched the career of its host, one of India’s most enduring superstars. Khwaja Ahmad Abbas’ Saat Hindustani was Amitabh Bachchan’s cinematic debut, and very soon, five decades […]