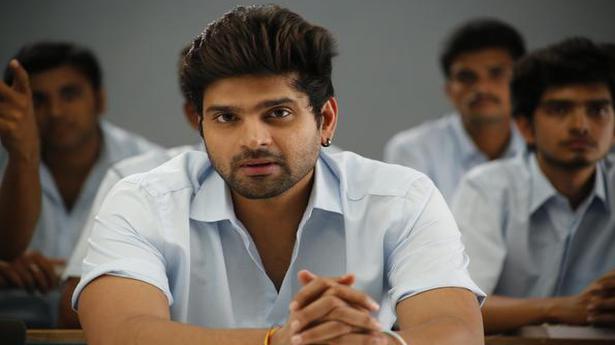 Sree Vishnu is a favourite with all newbie directors. All the directors who worked with him made news with their interesting films, be it Kishore Tirumala, Pavan Sadhineni, Sagar Chandra and now Vivek Atreya with the forthcoming Brochevarevarura. Vivek had earlier directed Vishnu in Mental Madhilo.

Set against a college backdrop Brochevarevarura, Vishnu says, is a fun film, a first such project for him. All the characters — of Sree Vishnu, Rahul Ramakrishna, Priyadarshi, Nivetha Thomas or Nivetha Pethuraj — have a strong dimension. Rahul, Rocky and Rambo, are a trio that is addressed as the R3 batch. Sree Vishnu adds, “I am a last bench student. I keep flunking every year. Unlike us, Nivetha Thomas, a fresh entrant in the college has a goal and in the process of interacting with her, we all change in our attitude. There are sub-plots that are connected to each other in the story.”

Ask Vishnu why most of his roles seem similar and , he attributes it to the success of a film. When a movie does well, and a character is liked by all, the actor is remembered in that role for a long time. “I cannot refuse the offer just because there’s a similarity to an earlier role,” he says. He nevertheless makes an effort to avoid repetition in genre, dialect and his look. “Actually I am getting all ‘last bench’ characters. In real life too I was never a topper so these roles are close to my real self. I have never played a clever and intelligent student so far. The title Brochevarevarura means ‘who is going to save me?’ Every character in the story has a problem and in the end, no one saves anyone, we have to face our struggles courageously and solve the issue ourselves. There is no point in thinking that someone will come to our help. The humour is weaved at every step in the screenplay.”

Sree Vishnu’s next project is Tippara Meesam, a bi-lingual directed by Krishna Vijay who had made Asura with Nara Rohit. There’s another film t be directed by Pradeep, about a cop, which will go to the sets after Tippara Meesam releases.

The cadence of spoken word

The ‘Baahubali’ star posted a picture with his fiance on his social media accounts, to the surprise of fans and the film fraternity alike Source Related

Joaquin Phoenix-starrer Joker has bagged the top prize at the 2019 Venice Film Festival. A jury headed by Argentine filmmaker Lucrecia Martel adjudged the film as the winner of coveted Golden Lion trophy, the festival organisers said in a statement. Directed by Todd Philips, Joker features Phoenix in the role of iconic DC Comics villain […]