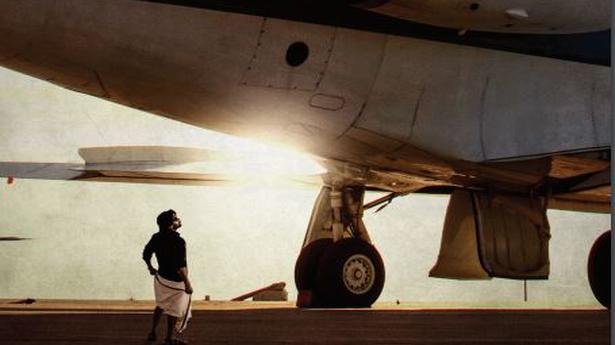 Actor Suriya will be seen next in a film that will be directed by Sudha Kongara, the director of the acclaimed Irudhi Suttru. Suriya released the first look of the film in Twitter on Saturday. Titled Soorarai Potru , the film has the actor in a typical south-Indian outfit against the background of a gigantic aeroplane.

Releasing the first look of the film on Twitter, the actor tweeted on Saturday that he was “in love with what was happening in the sets” of the film. The music for the film will be scored by GV Prakash. The film is being bankrolled by Suriya himself. This is Suriya’s 38th film.

Meanwhile the trailer of upcoming film NGK garnered a strong buzz among his fans. The film, directed by Selvaraghavan is scheduled to release on May 31. This is also the first time that Suriya and Selvaraghavan are working together.

Tipped to be a political drama, the film will see Suriya playing Nandha Gopalan Kumaran. Suriya also awaits the release of Kaappaan, in which he’s reuniting with director KV Anand after Ayan and Maatraan. The teaser trailer of Kaappaan will be released on April 14, Tamil New Year’s Day.

The rhythm is going to get you

Would you fancy a drum-jam workshop to explore the link between rhythm and movement? This hands-on demonstration at the Attakkalari Centre for Movement Arts (ACMA) seeks to understand rhythm through dance, according to Jayachandran Palazhy, founder and artistic director, ACMA. “This centre is a contemporary dance institution offering an opportunity to explore the inter-connectedness between […]

Watching Modern Love, an eight-episode anthology series based on the popular New York Times weekly column, is a disorienting experience. How is it possible to be both enlightened and disappointed at once? I detested and devoured the eight episodes in less than a day. I hated that I liked these self-satisfied little New York vignettes […]

The power of dance: An Instagram Live session with Rama Vaidyanathan to celebrate International Dance Day 2020