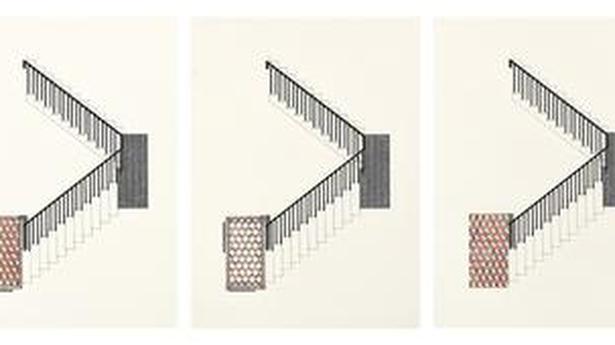 Architecture is the ‘mother art’, that’s rarely given its due in the creative world. While blueprints and technical drawings are an integral part of designing and constructing a building, these are seen more as functional rather than artistic expressions. Vishwa Shroff, whose ongoing show Folly Measures explains her affinity by drawing a relationship between the built environment and its use. She says, “Architecture tends to collect like — marks, scratches, breaks, cracks, all of that. So it becomes apparent when you walk through any space that has been around for a while…you look at it and wonder why something happened.”

Shroff’s work draws the viewer in for its painstaking detail, whether it’s the almost evenly spaced lines for the entrance in ‘View from Room 208’ or the painstakingly minute dots that represent tiles that are a contrast to the burnished grey flooring of ‘As Time Goes by, 1’. Both these works on gallery’s upper level are in contrast to the ‘Partywall’, Shroff’s names for the partisan walls that she has captured in painstaking detail on the ground floor.

Speaking to Shroff it’s clear that intention, the reason behind any action forms the basis for the work. She differentiates the focus on architecture from the man-made marks found on trees because, “Marks happen on everything, but architecture in its conception is already intentional.” This carries through to Shroff’s decision to cut around each of her works, to highlight its intent and significance. She explains, “When you cut something out and put it away, that thing that has been put away is more emphasised because it’s been very intentionally removed from somewhere….it’s very intentionally that only a part of the building is removed and redrawn.”

Shroff’s intent carries through in her decision first to document ‘Partywall’ — painstaking reconstructions of the partition walls that she calls residual spaces, in which “a building has been knocked down and part of it is still visible;” for their layered approach. She elaborates, “It was built with intention, it been taken down with intention and this residue is also just there for a particular period of time.” When walking around the city, Shroff seeks out architecture that matches her criteria of: who, what, when, where and why.

About ‘Partywall’, she says, “The first one I did was London and the next one I did was Tokyo, and then I did one which was an interim series. London [has] a very particular way in which they preserve [the older structure] while construction is going on. With Tokyo what happened is they have two or three materials that they use, and I decided that I would make my palette fixed so as to have a series. Then that idea of having my own palette fixed got even more stringent because I was documenting from four different cities. Then it made more sense to make a series to negate the original materiality to give a hint of the textures that appear.”

Most of the work in Folly Measures is from Mumbai, though there are two works that document architecture in other cities. Shroff says, “Bombay is jarring! There is a lot of colour variation, so if I got it in all of that, it would be too much to see. You would pretty much feel like you’re standing outside and not able to abstract it to where your brain comprehends the idea of what it is.” And yet, Shroff’s work manages to capture the geometric beauty of old Bombay’s Minton tiled floors. There are also almost fantastical staircases that go nowhere – purposely taken out of the building in which they were built and reaching upwards, while staying trapped in its wooden frame.

The thought-provoking and sometimes irreverent artist, has also created a new series of 16 prints. In this, she says, “I’ve attempted mapping people within space, and how really, physically we move within one space versus kind of just observing what the materiality of the space is.” The work, called ‘Everyday Rosella’ maps where she and her friend Rosella stand within Shroff’s home over a 10-day period. She adds, “I realised basically we are little ping pongs. But what I did realise is that I lean against walls a bit too much.”

at Tarq, Colaba until

How do you profile ‘Chiyaan’ Vikram? The actor, in his fifties, has had plenty of superlatives written about him in the past. He is a star, one with few parallels across film industries. And he’s the man who made method acting cool in Tamil cinema. But all of this information is well-documented, leaving very little […]