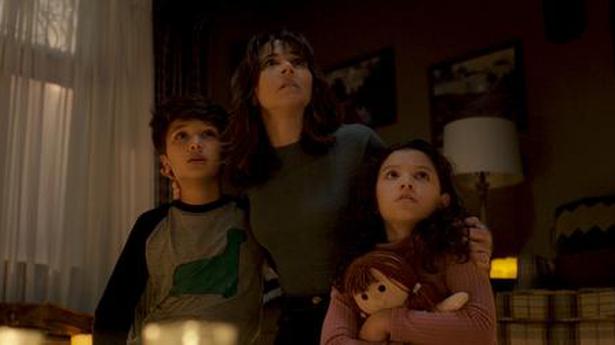 Dingy hallways with flickering lights, billowing curtains disguising paranormal silhouettes, eerie sonic interludes alluding to impending doom. These tried-and-tested scare tactics are de rigueur in most horror films. But it’s a tad disappointing to see their presence in a series like The Conjuring universe. Especially when it’s evident the creators are capable of more.

The franchise has now firmly etched itself in the collective consciousness of fans all over the world. The sequels to the films in the universe have lauded for their new take on the genre. The spin-offs on the other hand, haven’t fared so well. After the let-down that was The Nun, the sixth film in the series, The Curse of the Weeping Woman follows suit. Michael Chaves makes his feature-length directorial debut with the film that draws cues from Mexican lore.

The Curse of the Weeping Woman

La Llorona has killed her kids in a fit of rage as a response to her cheating husband. The cursed entity will continue snatching children till she gets her own back. Spoiler alert (though not really): they’re dead and never coming back. But yet the spirit persists. In 1970s Los Angeles, social worker Anna’s (Linda Cardellini) two kids becomes the Weeping Woman’s next prey.

With a wisp-thin premise, The Curse of the Weeping Woman struggles to stretch the drama and fear. La Llorona repeatedly attempts to get at the protagonist’s kids when a single try would do. The fact that it’s never quite clear why and how she chooses her victims is distracting till the end. Chaves’ efforts to scare the audience are by the book, never really taking any risks and mind-numbingly predictable. On closer inspection, even the Weeping Woman’s cracked white face, rotting teeth and black tears can’t conjure (get it?) any scares. Only Raymond Cruz as Rafael Olvera shines, in his role of sassy curandero (shaman) who helps Anna and her family. But when writers Mikki Daughtry and Tobias Iaconis introduce the Western substitute to magical jadi butis as a La Llorona cure, those eyes will roll.

Hugs and tears punctuated the taping of the last episode of The Big Bang Theory, a bitter-sweet moment for its stars, crew and audience alike. There were plenty of punchlines as well, as the true-to-form hit comedy about scientists and those who love them wrapped the two-part, hour-long finale that will air in mid-May on […]

Cricket is the biggest sport in India. Do you know what is the second biggest? Taking offence, if it were to be considered one. Else, it is a bit difficult to explain the sequence of events that unfolded after the trailer for Comali — a film starring Jayam Ravi scheduled for release on August 15 […]