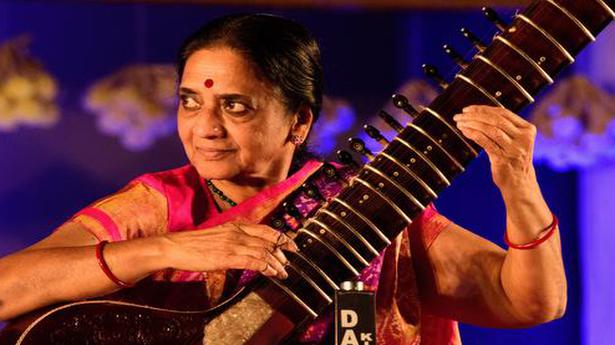 Manju Mehta is the first woman sitar player to have received the coveted Tansen Samman in 2018. And now the prestigious ITC SRA (West) Award was bestowed on her during the annual seminar organised by ITC-Sangeet Research Academy and Indian Musical Society in collaboration with Sangeet Natak Akademi, NCPA and Music Forum at NCPA, Mumbai.

The fact is that though women artistes have dominated the scene of classical vocal music and dance since time immemorial, the arena of Hindustani instrumental music has not thrown up as many acclaimed performers belonging to the fair sex, so far. The septuagenarian sitar exponent also waited in the wings for a long-long time but her indomitable spirit and her quiet, single-minded dedication towards her art now makes her stand out as a performer, guru and organiser – that too from a region of India where women are still struggling to be accepted in the mainstream of classical arts.

She agreed that she is the only lady who has emerged as a classical musician from a place which is known for severe conservatism, but refused to get accredited for any exemplary role played by her simply because she hailed from there. Instead, she politely reminded that she belongs to the Bhatt family that has produced several eminent musicians. “Aapko jaan kar aashcharya hoga (you will be surprised to know),” she said, “that my mother was encouraged to learn music from ustads (like Rahman Khan Kalawant – a court musician of Sikar) and kathakars who would come to the Royal Court and also visited our house in Jaipur. Later around 1947, my father sent her to Alwar to get formally trained by SA Maharkar and then join the Maharaja School as a music teacher.”

Such emancipated outlook was very rare in those days; even in other modernised regions of India! Undoubtedly, this musical mindset of the Master of the house inspired all his children to take music rather seriously. The eldest Shashi Mohan Bhatt was groomed by none else than Pandit Ravi Shankar. It was he who introduced his kid sister Manju to sitar. Her latent talent got noticed by all pretty early when she bagged two consecutive State and Central Government scholarships and got an opportunity to learn under the guidance of Pandit Damodar Lal Kabra.

“I left everything behind,” Manjuben reminisced dreamily, “and went to learn from Guruji, another senior disciple of Pandit Ravi Shankar. The ambience of a gurukul gave me a new perspective. It helped complete my master’s in music and also compete the All India Radio contest in flying colours. All this encouraged me to take up music as my profession and I began performing. During one such programme, I met Nandan Mehta, a fine tabla exponent groomed by the legendary Pandit Kishan Maharaj. Though he carried the mantel of his Ahmedabad-based ancestors’ business successfully, he was passionately in love with music and nurtured a dream to foster musicality in the region. Our ideals clicked instantly and we got married.”

This was a major turning point of her musical journey which put her on the crossroads of several avenues; and all of them demanded her undivided attention simultaneously. The doting husband needed her, their love-bound nest needed her, their dream-school Saptak needed her, two lovely daughters needed her, the riyaz sessions needed her and the stage beckoned her. An adoring daughter of her parents, she had seen how they managed their household along with their passion for music. It was a fine balance between familial bonds and ambition. Both held the pride of place in their lives. Manju Mehta nee Bhatt simply followed her parents’ footprints and everything else fell into place.

“But this took its share of sacrifices too,” she said, “By my choice, for almost ten years as I had to refuse concert-offers, radio programmes, etc. till my girls were young and needed my attention. I was very happy to see that they did well in studies and music. Hetal chose to learn tabla and Purvi took to sitar, and both are doing well as musicians now. With great satisfaction I picked up the threads again in 1980. Luckily, Pandit Ravi Shankar accepted me as his disciple. This was the time when Saptak Music Festival debuted in Ahmedabad, a place which had no history of such congregations!”

Despite all, life did not turn out as rosy as it appears. During a radio programme, she realised that her index finger, that enables playing the sitar, had gone totally numb. “This was a huge setback. I was completely shattered when I learnt that this was a neurological problem with very slim chances of recovery. Gradually, I tried to play with the middle finger. Initially, this adaptation seemed impossible; but I was determined to overcome this crisis. Soon, Nandan left us!”

Thinking about raagdari solaced her during these crisis periods. Innumerable students at the Saptak School benefited from her clarity of thought. One of them is Allarakha Kalawant, the young sarangi virtuoso. “Manjuben’s raagdari has graphical designs; it is ‘bandha hua’ (well-structured). She transmitted her ‘Senia-soch’ belonging to Senia Maihar Gharana very clearly. This learning is dependent on good memory. She always taught us in groups,” says her worthy disciple.

Racoon in distress turns into an Internet star

He may lack the poise of Guardians of the Galaxy superhero Rocket Raccoon but this little adventurer is becoming an Internet star in his own right. The mischievous mammal became popular on the Internet after he was photographed by U.S. firefighters during a bungled escape from a sewer on Thursday. “He had been stuck for […]

Want a dinner date with Khaleesi? Donate to the coronavirus fund

Game of Thrones star Emilia Clarke has offered a dinner date to people donating money to SameYou, her charity that supports those recovering from brain injuries and strokes, in the wake of the coronavirus pandemic. The new initiative by the foundation aims to help the National Health Service, the publicly funded healthcare system of the […]