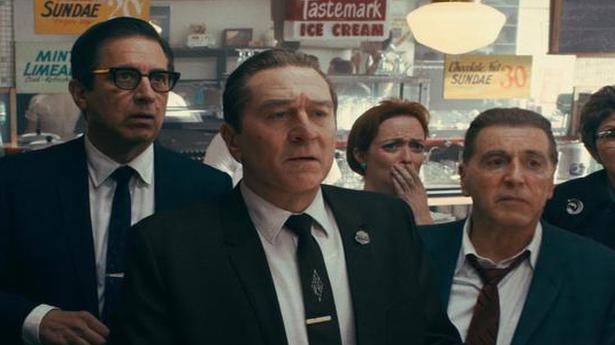 The Irishman is a mammoth, audacious creation. Several characters (and actors), big and small, the many decades of their lives, the sprawling skein of relationships and the numerous emerging stories are deftly knit together in a way that no seams show; with one man — aged mob hitman Frank Sheeran (Robert De Niro)— at the core. Scorsese’s filmmaking is all about fluidity and also precision. He conducts the symphony in a way that no note falls out of place right down to the staccato moment when the significance of I Heard You Paint hits home to the audience, all in a matter of a quick gun shot.

The reminiscence of Frank has him look back at the various criminal activities that he got drawn into, from having been a World War II veteran. Where did the Irishman learn such good Italian (and the art of knocking off people), Russell asks him. While taking on the Italians on the war front. Executing orders, killing in cold blood is like second nature to him.

However, it’s the human dimension that towers over the essential violence and brutality. A series of flashbacks take us back to Frank’s relationship with Russell (Joe Pesci) of the Bufalino crime family and the labour union leader Jimmy Hoffa (Al Pacino) and to the estrangement with his own daughter Peggy (Anna Paquin). The bonds with Russell and Jimmy are sealed with the glue of faith and devotion while the fractures in his relationship with Peggy just refuse to mend. Meanwhile, betrayal plays out as just another side of loyalty, treacheries balance out friendships and guilt and remorse are posited as man’s perennial partners in a spiritual wasteland of a life.

Much may have been written about the “de-aging” and “youthification” but it’s ultimately the actors who matter, not the technology. De Niro is the Irishman and he wins it with a largely stoic visage and presence; but behind it also lurks a deep vulnerability that he pretends to hide, but can’t always. Pesci is pointedly sharp and canny as Russell, and Pacino plays the ice-cream lover Jimmy with flashiness and relish. Both are on top of their game and deliciously so in the impeccable jamming with De Niro in the absurdly dour comic scenes.

For a film on crime, The Irishman, which played at the Mumbai Film Festival, is replete with humour, poignancy and profundity. The epic Frank-Russell-Hoffa combine could well parallel the creative collaborations of Scorsese-De Niro-Pesci-Pacino-Keitel spread over years together in the business of making films. And Scorsese may well be revisiting and invoking his own enviable body of work through the film. However, there’s a distinct, overwhelming autumnal air, all its very own, about The Irishman. A relentless march of time informs it even as bodies pile on, blood keeps spilling over and those giveaway guns get presciently hidden in the bed of the water body, enough in numbers, as Sheeran says, to help build a small nation’s army.

Most of all, the film is an ode to inevitable mortality and loss and eventual loneliness at the heart of living. All one will be left with are memories, regrets and one’s own company. That’s the only certainty. The affecting, ruminative finale and the melancholic last scene leaves a metaphorical door ajar in our hearts, a deep hollow that’s hard to fill long after the film is over. I never knew one could cry in gangster movies.

On the right track

It’s inevitable that Mumbai, would eventually have a music group called, Ladies Compartment. Established a year ago, the group calls themselves, a dynamic music project, that’s a tribute to the daily trials of a working woman in the city. Says Aditi Ramesh, “We took the title from the local train. In a ladies compartment, women […]

Pack your own snacks — preferably home made. But make sure you have enough to share with about 40 other people. If you are running out of ideas on where to take your Tinder date, and bored with the packed club scene, check out Motojojo. An experiential platform, it aims to curate unique indoor and […]