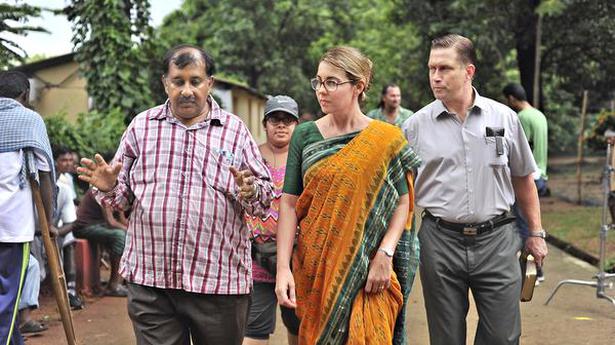 Two decades ago, in the middle of the night, a gang led by Dara Singh, a criminal with links to the Bajrang Dal, a Rashtriya Swayamsewak Sangh (RSS) affiliate, set fire to the jeep of Australian Christian missionary Graham Staines, who was asleep with his two sons, Philip and Timothy. The mob was driven by suspicion of conversions undertaken by Graham in rural Odisha. “It was a turning point for fake news,” says filmmaker Aneesh Daniel, who has closely followed the story for the last 19 years. “Everybody was told about the conversions, it became tenfold and he was killed.”

From then to now, in the era of WhatsApp, the repercussions of fake news has only intensified, lending Daniel’s film, The Least of These: The Graham Staines Story, contemporary relevance. “The forces [of fake news today] are stronger when they try to divert the attention,” says the 50-year-old filmmaker. But the central theme of the film and its appeal is “forgiveness, hope and love”, as Graham’s wife, Gladys, demonstrated by pardoning the killers, says Daniel. The film chronicles the story of the Staines family through the eyes of an investigative journalist, played by Sharman Joshi, who tries to uncover the truth behind the allegation of religious conversions.

In June 1999, the Wadhwa Commission, headed by Justice D.P. Wadhwa of the Supreme Court, found Singh guilty but ruled out the involvement of the Bajrang Dal as there was no evidence to suggest that any of the persons involved in the crime was a member of either the Bajrang Dal or the Bharatiya Janata Party (BJP). This, despite evidence to show that Dara Singh and his associates were active sympathisers of the two organisations. The Commission itself had acknowledged that Singh was involved in the cow protection movement and had earlier targeted Muslim cattle traders. Senior members of the then ruling BJP government, including George Fernandes and Narendra Modi, supported the findings and attributed the murder to “international conspiracy theories”.

However, since Gladys forgave the killers but allowed the law to take its course, the Hyderabad-based filmmaker says he refrained from pointing fingers in his film. He hasn’t either mentioned Singh nor hinted at his affiliation with the Bajrang Dal. “Fundamentalists don’t have a religion but they have their motives,” declares Daniel, who wanted to contain the film to forgiveness and debunking fake news that surrounded the Staines’ family and their work.

Interestingly, the film is releasing in at a time when the BJP is in power at the Centre again and up for elections. Does Graham’s story find a renewed relevance? “We started the pre-production of the film in 2014 but we wanted to release it in the U.S. first and it takes time to market a film, that’s how it is now out so close to the elections,” says Daniel. “That is a challenge for us but we have not raised any fingers on anyone.” He believes that had the film released during the UPA rule, they would faced similar apprehensions. “This challenge will be there, irrespective of whatever time it is, because you are standing up and telling the truth,” adds the filmmaker.

Speaking of a timely release, how does the filmmaker draw parallels between the communal tensions two decades ago and today? “Communal tension will prevail even 10 years from now. But the challenge was to come out from all that hungama [noise] and tell the story from the perspective of an investigative journalist,” says Daniel, adding that he didn’t want to glorify the killers by giving them importance in his film.

Daniel emphasises that The Least of These isn’t a Christian faith film either. Although, Stephen Baldwin, a vocal born-again Christian actor, who plays Graham, has previously featured in faith films like Faith of Our Fathers (2015) and I’m in Love with a Church Girl (2013). “If you categorise it under faith films then it becomes a propaganda film,” explains Daniel. “But the danger is when the faith people start saying that this is my film.” For the filmmaker, Graham belongs to everyone who believes in goodwill, not just Christians.

Having started his career in the film industry in 1989, Daniel was sure he wanted to make his feature debut with a true story. A year after Graham was murdered, he met Gladys, who asked him to return a year later. When he met her again, she requested him to write a draft and revisit her. Around 2003, he met his writer, Andrew Matthews and their story got Gladys’ approval, but the project took flight only four years ago. With the intention of reaching out to a wider audience, Daniel chose to tell Graham’s story in English. Released in the States last month, the film, which is out in India today, will travel to South Africa (April 12) and Australia (May 16). “Graham’s story has to be heard far and wide for the element of forgiveness to become stronger,” concludes Daniel.

‘He was never afraid of failing’: Filmmaker Karan Johar on Yash Chopra

He settled into love [stories] much later in his career, says Karan Johar in a discussion on Yash Chopra on the Hindu Weekend’s Instagram Live series #DirectorsOnDirectors Source Related