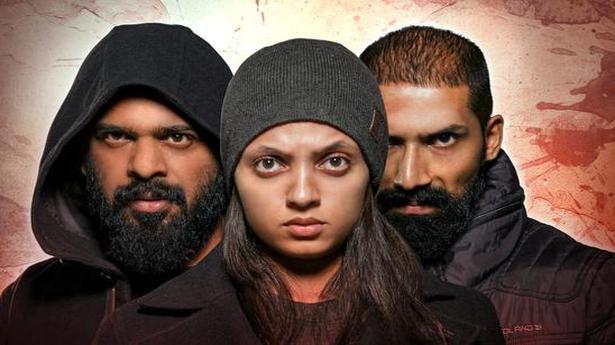 A typical action film in Malayalam comes loaded not just with action. It is often a few minutes of fist fights sandwiched in between a long-winded family or political drama. This is where Abrid Shine’s latest outing The Kung Fu Master differs, dedicating much of its second half to just pure action, not the mindless variety, but some fluid show of the Wing Chun style of Kung Fu.

But the novelty in the action is sorely lacking in the script, for which clearly much effort has not been spared. Probably, the director did not want to take his attention away from what he set out to do – to create an all-out action film. The story is thus just an excuse for all the action that is to follow.

Part of the first half is spent in building the picture of a family oozing so much happiness that one knows that a tragedy is waiting for them, as so often happens in such scripts.

These parts of the film are marked by some lousy acting and clueless writing. Rishi (Jiji Scaria), a Kung Fu trainer, becomes the target of a gang of criminals led by Louis Antony (Sanoop D), after he turns an informer for the police.

Only Rishi survives the inevitable attack that follows. Rishi, along with his Kung Fu-trained sister Rithu (Neeta Pillai) sets out to hunt down the gang.

The ones who manage to survive this bland first half are in for a treat. The director too seems to be in a hurry to finish off these initial parts, to reveal all the hard work he has put in, for the action sequences featuring some authentic kung fu.

That the leading lady Neeta Pillai (who debuted in Abrid Shine’s forgettable Poomaram), is one of the main fighters makes it even better.

She, as well as Jiji Scaria, appears convincing in delivering each of those mind-blowing kicks or those high speed punches, which leave the opponents shaken. Theirs are also the only acting performances worth speaking about in the movie.

The Kung Fu Master showcases the kind of action that Malayalam cinema has not witnessed before. It makes the film stand on its own despite having one of the shoddiest of scripts in recent times.

While Kollywood waits for a clearer picture before restarting filming, the community bands together to find creative ways to survive the year Source Related

‘It’s tough to gauge what is real on social media’

Actor Janhvi Kapoor and filmmaker Sharan Sharma discuss online trolls, misogyny and how Gunjan Saxena’s relationship with her father is like that of Simba and Mufasa Source Related

Gucci purple, an Indian designer and brooches for men on the Oscars 2020 red carpet

Red carpet coverage isn’t just about the women anymore. Be it at the BAFTAs, Grammys or today’s Academy Awards, men are known to be either classic or adventurous. Most noticeable was the bijoux on several stars — Timothée Chalamet, Mahershala Ali, Brad Pitt, Taika Waititi (see pictures) … For Kobe: Director Spike Lee wore a […]