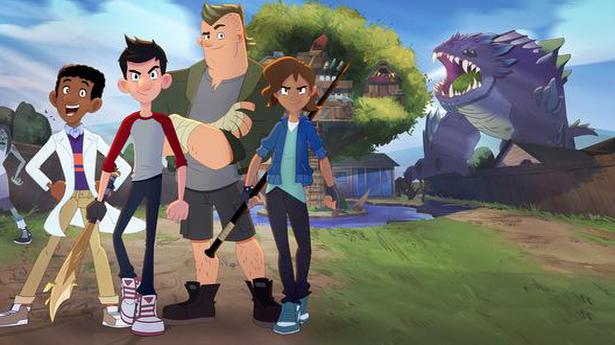 The Last Kids on Earth, like Max Brallier’s eponymous books it is based on, is immense fun. The talented voice cast, which includes Mark Hamill and Rosario Dawson, is an added bonus.

The world as we know it has ended and is overrun with monsters and zombies. It is left to 13-year-old orphan Jack Sullivan (Nick Wolfhard), who spends his days in a tree house eating junk food, playing video games, to make the last stand, which he does with spectacular flair. He is helped in his efforts by comrade in dorkiness Quint (Garland Whitt), the reformed bully Dirk (Charles Demers), the love of his life June (Montse Hernandez) and a monster dog, Rover. As a means of coping, Jack makes survival a video game and lists his different feats of apocalyptic success, which includes fun stuff like stealing the hats off five zombies and the ultimate feat of rescuing damsel in distress.

The Last Kids on Earth

Like the books (there are five of them now) the tone is humorous rather than the bleak outlook of most post-apocalyptic YA — that zombie ball reminiscent of the bouncing boulder from Raiders of the Lost Ark was just one of the fun sequences. The animation takes off from Douglas Holgate’s excellent illustrations. With Brallier as writer and one of the executive producers, the show’s bookish roots are celebrated — season 1 is called Book 1.

The Last Kids on Earth with its bright and busy animation and cheerful tone, is a happy way to pass an evening.

The Last Kids on Earth streams on Netflix

Despite a great cast, for a series that has stand-up comedy and humour as its central premise, the impact is lacking When the trailer for Bhaag Beanie Bhaag dropped, comparisons with The Marvelous Mrs Maisel seemed inevitable. Despite the fact that both shows have their leading women taking to the stage as they attempt to […]

Canadian filmmaker Xavier Dolan’s quietly-beautiful portrait of two friends with conflicting sexual identities, may not be as punching as his previous works. It is, nevertheless, an affecting watch Source Related

How does you elevate a commercial potboiler? A filmmaker would probably make a list of all the cliches and try to avoid or at least subvert them, but in Pailwaan, the tropes are treated as a checklist to ensure that none of them are left out. An orphan and a father figure; a choice between […]