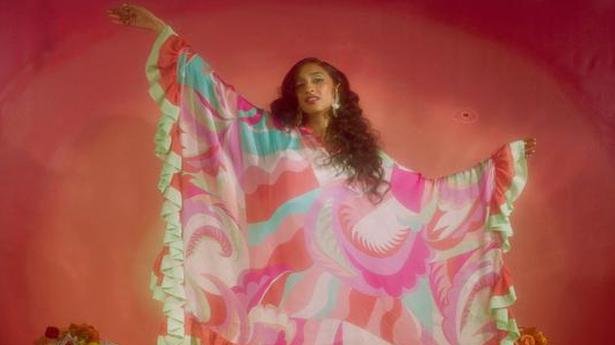 Beneath the saccharine R&B and soul croon of Indian-American singer Raveena Aurora’s début album, Lucid, there are vulnerabilities and uncomfortable truths. In the third track, ‘Stronger’, she sings these lines over a smooth, lilting beat: “I was so naïve/To think a man could be stronger than me”. The rest of the song maintains a similar bleakness, but the hook in the chorus — “I’m stronger” — is what the listener is likely to take away.

By the time Lucid released in May, the artist — who goes by the mononym Raveena — had already spent five years establishing a distinct aesthetic as a ’90s Bollywood-loving songstress whose work remained rooted in R&B and soul. From her bindi to shimmering jewellery and even the dreamlike filters used in videos, album artwork and portfolio shots, it’s clear that there’s an earnest correlation between Raveena’s visual and sonic identities. “While a lot of my influences right now stem from a mix of my Indian culture and listening to a lot of soul/R&B growing up, I want to keep pushing boundaries as an artist and keep growing,” she tells me.

From start to finish

Singles like ‘Sweet Time’ and ‘If Only’ from 2018 made Raveena the voice to watch out for, but Lucid is a full-length offering. She calls it a “concept album, in that it told a really specific narrative and it’s a cohesive body of work meant to be played from start to finish and tell my story”. Releasing an album in 2019 after a slew of singles and EPs is daunting, she admits. “I think the anxieties around releasing it were more around how it would be received — if people would like it or listen to the music. I also was the most vulnerable that I’ve ever been in this new body of work, and releasing my story like that into the world was really scary.”

Now that it’s out there, the 25-year-old New York resident, who launched her music career in her home town of Stamford, Connecticut, says she’s less attached to the album. “I’m just learning to be in love with joy of the writing phase again — that’s definitely the best part of all of this,” she says.

In addition to finding resilience and hope for love in the world, Raveena also looks back at family history in two songs, ‘Mama’ and ‘Nani’s Interlude’. Her family lost their homes and relatives in the 1984 anti-Sikh riots, which she doesn’t hesitate to term as genocide. She explains, “The words chardi kala were always thrown around by elders in my household, which is the Punjabi term for ‘maintaining a mental state of eternal optimism and joy’. I think this spirit lives on through my music, which is often about healing and finding joy after experiencing pain.”

In ‘Mama’, she salutes immigrant mothers (including her own) and their sacrifices, asking, “Who were you/Before your man?” Emotions, she says, guide her work, and balancing them with lyrical narrative is a craft that the singer has mastered with mind, heart and soul in Lucid. As she sings “Stay and kiss your neck a little harder/Chase you down till I don’t feel younger” between blips of synth in ‘Still Dreaming’, you can tell Raveena has found her space, and that she is wiser and better.

Bengaluru memories of the saxophone great

Just as Mandolin Shrinivas took up a foreign instrument to make it work for the nuances of Carnatic music, Kadri Gopalnath Indianised saxophone to perfection. Back in 2014, he had shared his instrument’s 100th birthday with The Hindu. Looking lovingly at the Belgian instrument he played on, manufactured in 1914, he had told this reporter, […]

At the Ganpati festivities in Pune in September last year, an American joined in and played with the street drummers. Nobody seemed to know he was Greg Ellis, renowned percussionist who has also worked in 150 Hollywood scores including The Matrix: Reloaded, 300, Iron Man, Body Of Lies and Argo. Though he follows various global […]