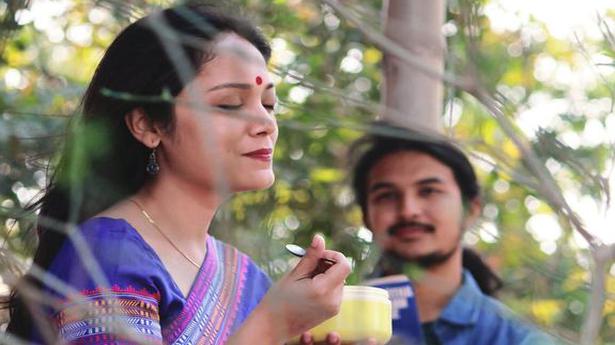 “My job is to think of weird subjects… only then will my content be fresh,” Bhaskar Hazarika said, about audiences at screenings questioning him on how he hit upon the idea for his Assamese film Aamis.

Aamis, or Ravening, has intrigued and provoked audiences around the globe in equal measure, since its release last year, and has earned the filmmaker substantial critical acclaim. “Trust me, you have not seen anything like Aamis coming out of India,” said Anurag Kashyap in an Instagram video last year. Kashyap went on to present the film as well.

Aamis traces the story of Nirmali (Lima Das), a married doctor, who befriends Sumon (Arghadeep Barua), a young student researching food habits in Northeast India. While they bond over their love for food, their relationship goes on to take a dark and almost bizarre turn as it tests societal boundaries.

Hazarika was in Chennai recently weekend for a screening of the film by cinema club Cinema Rendezvous, for an audience of over 90 people. “While I initially expected a lot more people to get provoked by the film, the way we have presented the story has made a difference. Our aim was never to vulgarise the relationship between Nirmali and Sumon or titillate. And the audience in turn empathises with the story. They are left with a lot of questions surrounding morality and societal taboos.”

The filmmaker burst into the limelight with his début film Kothanodi, which won the National Award for best Assamese film in 2016. “It was the first film in Assamese to be picked up by Netflix,” he said, describing streaming platforms as a game-changer in promoting regional content.

Kothanodi was also partly funded through a successful crowdfunding campaign, and paved the way for many more filmmakers from Assam to explore different avenues with regard to financing their projects. “Assam has the highest number of cinema halls in the Northeast, and while we might be behind compared to other States with regard to the cinema-viewing culture, we are catching up quickly,” he said.

Message in the subtext

Going back to his love for fresh subjects and content, Hazarika said that the social commentary in his films will always be natural and unconscious. “I can never declare that I will focus on a specific subject and then go on to make a film about it. It should be the other way round — if there is a message, it will be part of the film’s subtext,” he said, when asked about the themes he wants to focus on.

What about movies with a message? “It should come off as an experience. As a viewer, you should be able to feel it,” he said.

Both Kothanodi and Aamis feature prominently in the acclaimed filmography from Assam over the last few years, alongside Bulbul Can Sing, Village Rockstars, Ishu, and Ratnakar. “Films from Assam are getting better every year. Similar to Malayalam film Industry, I feel we’re surging forward and putting forth films with fresh, interesting subjects year after year.”

The filmmaker, who has a writing credit for the 2012 Bollywood release Players, said it isn’t wise for filmmakers to isolate themselves from the Hindi film industry. “You might not like the way they think, but it is impossible not to be associated with them,” said Hazarika, who also hinted at a Bollywood project in the coming year.

Fresh indie musicians from around India feature in this album

In 2018, 12 independent musicians from various cities in India had descended in Chennai, as had music producers and students from Queensland College of Music in Australia. What followed were days of collaboration and recording sessions, the result of which is finally ready. EarthSync, the production house behind Chennai’s annual IndiEarth XChange festival, is all […]

What do the stars do on Deepavali day?

Fireworks contest A Deepavali memory from her chilhood that stays fresh in Soundarya Rajinikanth’s mind is the fireworks competition she and her neighbour engaged in. “If we lit up a 100-wala, they would set off a 200-wala,” she laughs. Deepavali is celebrated with the most fervour at the Poes Garden residence of actor Rajinikanth. “Our […]

President Ram Nath Kovind on Sunday presented actor Amitabh Bachchan with Dadasaheb Phalke Award, Indian cinema’s highest honour, in a special ceremony at the Rashtrapati Bhavan here. Mr. Bachchan was earlier supposed to receive the honour at the National Film Awards ceremony last Monday, but the 77-year-old actor was unable to attend the event due […]