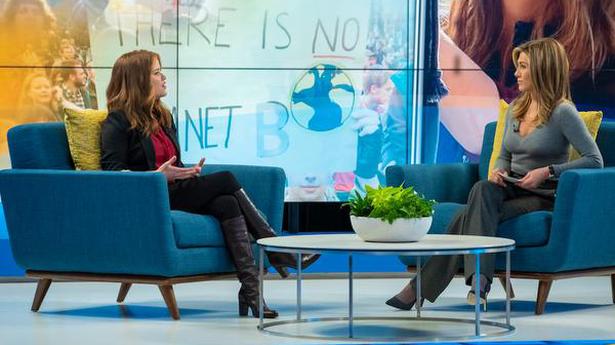 The opening scene of The Morning Show’s pilot episode sees a 3:30 am wake-up call on everyone’s iPhones — it’s an Apple original, of course — which shakes up the world of all-American news segment of the same name ‘The Morning Show’. “Someone better be dead,” says a groggy Mitch Kessler (Steve Carell) as he answers his phone. Well, it was something, not someone… Kessler’s career, as sexual assault allegations against him come to light and a cataclysmic restructuring follows where no time is wasted.

Regarding #MeToo, The Morning Show is an interesting strategic first move by Apple to strike while the iron is still hot. After all, the show’s premise is alarmingly similar to the sexual assault allegations against veteran presenter Matt Lauer (whom Steve Carell somewhat resembles). Since then, network television has been flayed open to public outrage, and The Morning Show offers a glimpse into an image-oriented industry which is no longer unfamiliar to us, thanks to the battle-cries of #MeToo and Time’s Up. And with Bombshell, which belies the sexual harassment cases at Fox, in the offing, it seems like creative production is taking a happy wade through the scorching media ecosystem.

With all this going on, it would not be surprising if some of us are increasingly curious about the interiors of network television here.

‘Away from the predictable’

For years, Aniston vehemently denied interest in joining social media but one’s got to wonder how well-timed her record-breaking Instagram debut really is. How well-oiled is Apple’s PR machine? Any way, Aniston’s post-Friends return to television as a central cast is a memorable one. As perseverant anchor Alex Levy, she balances family life and a network television show which has seen better days. Levy, who has long-called Kessler her “TV husband,” fears for her future at the network given her roots at her stable job have been ripped away. After a recent queue of mediocre projects, Aniston is finally given the acting challenges she deserves.

Witherspoon, whose television career goes from strength to strength, plays strong-willed field reporter Bradley Jackson from a lesser-known network in the south. To sum her up, one colleague tells her, “you don’t just push back, you incinerate.” However, over the years, Jackson has been sidelined for promotions, but a spontaneous act of citizen journalism throttles her towards her big break. Jackson’s and Levy’s interactions are a delight to watch, bound to invite a shoutfest from viewers.

Witherspoon and Aniston’s characters are strong centripetal forces for the storyline, their head-butting characters uncompromised in their arcs. Anyone anticipate a renewed Jill-versus-Rachel rivalry?

Steve Carell’s performance in 2014’s Foxcatcher solidified his dramatic acting chops and the talent continues in The Morning Show. His character Mitch Kessler’s world is turned upside down by sexual allegations against him. Kessler then goes into hiding but his resounding scream, “It’s all Weinstein’s fault!” is more telling.

A dark horse, studio head Cory Ellison (Billy Crudup) puppeteers various ministrations after the Kessler fallout. “Change can be good; one man’s tragedy can be another man’s opportunity,” Ellison says, reminding audiences that the show must go on. Much like his role as Dr Manhattan in Watchmen (2009), Crudup does a brilliant job of pulling off ‘cool and collected.’

Don’t expect something akin to The Newsroom here; The Morning Show has a touch of satire but has mastered this across the ten episodes without trivialising the sexual misconduct discussed in the show. From Shameless and The Leftovers fame, Mimi Leder, director of majority of the show’s episodes, guides a talented cast with precision and care, as characters’ family troubles and career roadblocks arise.

Thankfully, the script has strayed away from the predictable, and narrative strategies for each character aren’t in direct conflict with each other. Most importantly, we don’t see characters in an ego-driven world talk at each other despite the rough road, nor do we see attempts to dissect nuances of human nature, especially around an issue that requires more action than analysis.

Mood-driven cinematography, detail-oriented production design and thoughtful costume curation culminate a pretty sleek production value — inexorable for Apple. Considering The Morning Show is their debut drama upon which much of their hopes are banked, they’ve nailed a decent success formula here.

Off to a strong start, The Morning Show should have a second season in its future… whether or not it includes Kessler.

Apple TV+ will be available on the Apple TV app for ₹99 per month with a seven-day free trial starting November 1 on iPhone, iPad, Apple TV 4K, Apple TV HD, Apple TV (3rd generation), iPod touch and Mac. To subscribe to Apple TV+, customers must update to iOS 12.3 or later, tvOS 12.3 or later and macOS Catalina.

The subscription will automatically renew at ₹99 per month at the end of the seven-day free trial.

Former movie producer Harvey Weinstein, who is serving a prison sentence for sexual assault and rape, has tested positive for the coronavirus, according to the head of the state corrections officers union. Weinstein, 68, has been placed in isolation at Wende Correctional Facility, said Michael Powers, president of the New York State Correctional Officers and […]

Amid the noise and activity that the Krithi International Festival of Literature and Knowledge is, sits a bright, cheerful stall whose shelves are lined with vibrant paintings. Birds, animals, still life…it is a kaleidoscope of colours. These are the works of Brian Varghese Pradeep and Basil Joseph Varghese who are autistic. At the stall are […]