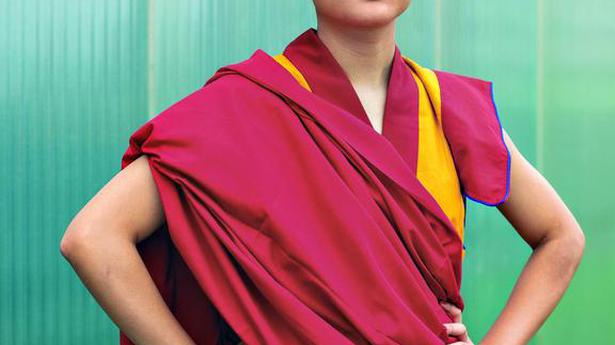 A young woman in the distinctive red-and-yellow habit of a Tibetan nun strikes a pose of grit and resilience in a widely shared publicity still from Abhishek Majumdar’s new play Pah-La, soon to premiere at London’s Royal Court Theatre. With her hands resolutely on her hips, she stands in for the play’s protagonist, Deshar, a young Tibetan runaway who becomes a Buddhist nun. In the play, a new struggle for freedom is sparked off by Deshar’s singular ‘act of defiance’, an attempt at self-immolation that takes place long before the first recorded real-life case in 2009. Powerful and historic in its scope, Pah-La is based on true accounts from the insurrection in Lhasa in 2008. Although the uprising was violent and bloody, Majumdar weaves it into a narrative that is a meditation on the non-violent means that purportedly characterised past struggles in the region.

Although the girl in the photograph is not part of Pah-La’s cast, she is one of many multicultural ‘people of character’ who represent the Royal Court’s impressively inclusive spring season in promotional material. The diverse offerings include a verbatim piece on the illegal detention of young Russian antifascists; a documentary retracing of a transatlantic slave crossing by cargo ship; and a play on the furore ignited by a racially-charged skin cream advert in Singapore. Pah-La almost did not make the cut. Originally slated to open at the venue’s studio space, Jerwood Theatre Upstairs, in October 2017, the initial fixture was cancelled ostensibly due to ‘financial reasons’, However, Majumdar went public with credible allegations that the play’s shelving was on account of pressure from the British Council’s cultural wing in China. A public apology later, the play was reinstated in the venue’s arts calendar, albeit for this year.

The primary characters in Majumdar’s play are ethnic Tibetan, except for a Chinese police officer, Commander Deng, and his family. It’s a mixed-gender ensemble of eight actors, playing 17 characters ranging in age from ten to the mid-fifties. Earlier this month, the cast for the Royal Court production directed by Debbie Hannan was unveiled. Conspicuous in a line-up of mainly East Asian actors was the complete absence of Tibetan talent. The announcement swiftly prompted the hashtag #SeeTibetans on Twitter, and strong murmurings of dissent on what is being perceived as an egregiously tone-deaf oversight. The venue immediately released details of its casting process — a public open audition call in December had not led to anyone of Tibetan heritage being shortlisted. The release stated that the venue did always “interrogate the politics of the casting, and take very seriously our responsibilities” towards the international plays they produced.

Actor and activist Kunsang Kelden wrote, “Leaving Tibetans out of stories about Tibetans damages our visibility and our impact to exist. It relegates us to a disappeared nation, not the modern people that we are.” She and other actors claim to have been stonewalled during the audition process. She called out the Royal Court for using Chinese political rhetoric to characterise the Lhasa uprising as a ‘riot’ in their promotional material, and the misleading image of ‘a Tibetan girl in a nun costume’ to sell tickets. She also called into question Majumdar’s own outreach efforts with the Tibetan community based in London. It is important to note that this is not a case of white-washing, such as the controversial casting of Tilda Swinton as an ancient Tibetan monk in Doctor Strange. The actors in Pah-La all come from minority backgrounds not adequately represented on the British stage.

As someone who has developed a strong affiliation with the Tibetan cause, Majumdar wrote a lengthy open letter on Facebook. While he was not involved in casting in this case, he asserted that his own production of Pah-La (in Tibetan) to be staged in Dharamsala had already secured an all-Tibetan cast. His painstaking research and work on the play has spanned five years, and he assured his Tibetan friends that there was no intention on anyone’s part to exclude Tibetans.

A meeting between the venue and those who have stated their misgivings publicly finally went ahead, with Tibetan filmmaker Sonam Anjatsang later tweeting, “(The Royal Court) were open, transparent and apologetic. They are committed to #SeeTibetans in theatre, we look forward to continuing the conversation!” This was an important dialogue on the politics of Tibetan representation on one hand and cultural visibility on the other, whoever the agents might be. It would certainly have been a pity if Tibetan audiences in London were alienated from watching a rare and significant play about themselves.

Between the playful and the political

A crossover genre with multiple influences, performance art continues to be intriguing, strange and full of surprises as it increasingly occupies more space in the arts arena in the country. Often immersive, amusing and rooted in radical acts, performance art is still considered relatively nascent in the Indian contemporary art scene. It eludes definition and […]

Bikram documentary in copyright row, even as fugitive guru likely to set sail in India in Jan 2020

The thing with in-game villains is that you know they’re always safely away from you in a completely different realm. The scary part of Control is an otherworldly collection of whispers that make up what is called The Hiss, which has corrupted reality. It seems to reach you through your speakers and threaten to corrupt […]