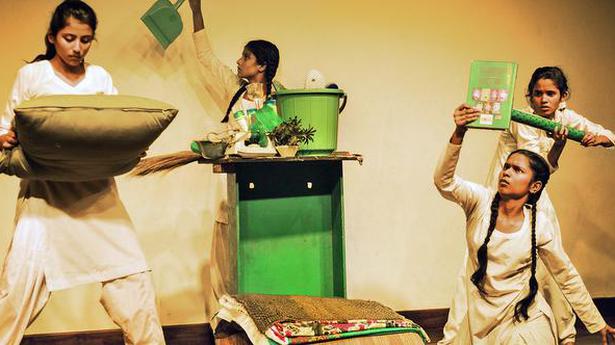 The opening strains of a new play is the lachrymose bidaai song, ‘Ghar se dola chala ladli ka’, which immediately evokes the time-worn shackles of tradition that tether young women to their pre-ordained destinies. However, the Aagaaz Theatre Trust’s Bhagi Hui Ladkiyan, directed by Dhwani Vij, soon belies such downbeat expectations, as it unleashes upon an unsuspecting audience four disarming young performers, each more spirited than the last, who essentially play themselves. Jasmine, Nagma, Nagina and Zainab all hail from Delhi’s bustling Nizamuddin Basti and through their personal stories they draw us into its tiny hovels and narrow streets, offering despair and optimism in equal measure.

It’s a world caught up in a time warp, set to the steady soundscape of 1990s commercials persisting well past their ‘use by’ dates. However, the play isn’t afflicted by the gaze of, let’s say, Zoya Akhtar and company, in which those across the social spectrum are necessarily caught up in a haze of mandatory aspiration. The world of Bhagi Hui Ladkiyan is much more self-sufficient and rooted, and although education has given them wings, these young women know who they are and where they belong without a tinge of self-loathing.

The title is inspired by the eponymous poem by Alok Dhanwa, which was used during the devising process. Indeed, what runs through the play are the undercurrents of, if not feminism, at least a prototype. The charming ditty ‘Samajh nahi aata’ that the characters rap, speaks of little rebellions and small defiances which, even if not carried through, bear the charge of the new-found agency borne out of questioning the status quo (something their mothers might not have done). The young women, whose childhoods and adolescences are tossed up and served, speak candidly of growing pangs, of love and morality, of sex, periods and other taboos. The simple pleasures of humble living and the minutiae of daily existence are treated with delight and revelation — the mise en scène is constructed and broken down and built again by rudimentary household objects. Underneath, there is still grit and steely composure. The spectre of abuse and mental illness isn’t shied away from, and the clutches of patriarchy always visible. What allows escape, though not as literally as the runaway girls of the title might suggest, are the flights of fancy each character affords herself — mired in humour and self-awareness and vim.

The play’s performance at this year’s META festival, where it won a special jury award, generated a rare sense of occasion. The ‘visibilising’ of the lives of young underprivileged Muslim girls on a podium, partial to visual spectacles and epic ensembles through a pared-down production propelled only by its actors’ tempers was a welcome irony not lost to many. The delivery of the young performers was artless to an extent but not completely devoid of craft. They held both sentiment and levity well and possessed natural poise and presence on stage. Similarly, the devising of interior worlds and spaces, through gestures and arrangements of props, while unexceptional, was functional and effective in the context of the piece. There was clutter, but also order, and occasionally meaningful metaphors emerged. It must be said that the play’s running time was much shorter than anticipated, raising hopes of it being developed further.

Vij’s eye for the political in the personal is unerring, but she mutes down statements or ‘messages’ to arrive at a balance of tone that prevents the play from falling into the trap of what one might term liberal hand-wringing. The use of green (the Islamic colour of choice) visually is no coincidence, but doesn’t call too much attention to itself. When the women take off their chadors and generally fool around, the scene is more playful than provocative. In the end, a veritable map of the Nizamuddin Basti is laid out before our eyes and each character takes audience-members on a birds-eye tour of their stomping grounds. A cacophony of voices and sounds soon fills the space, and there is a self-knowing nod at the ‘poverty tourism’ engaged in by the spectators unwittingly. It’s a minefield that Bhagi Hui Ladkiyan itself manages to commendably sidestep.

Bhagi Hui Ladkiyan will be staged from this evening onwards at multiple venues; see bookmyshow for details

A Hungarian visual artist named Flora Borsi has accused the makers of Rajkummar Rao-Kangana Ranaut starrer Judgementall Hai Kya of plagiarism. Borsi said that posters of the film bear inspiration of her trademark style, and said such plagiarism of a freelance artist’s work was shameful. Borsi on Monday shared the image of an original artwork […]

When auteur Shaji N Karun gave actor Esther Anil the script of his film, Olu, to read, she was in two minds. While her parents were ecstatic about the opportunity to work with a filmmaker like Shaji, Esther wondered if she would able to step into the shoes of Maya, the lead character in Olu. […]

The stage at Phoenix MarketCity is already crowded with six members of the band Dogo Fara, all the way from Reunion Island. But the musicians made space for three more, as members of the All for One dance crew hopped on stage, rendering koothu style steps to the band’s Afro-Maloya dance beats. As Bengaluru-band Swarathma […]