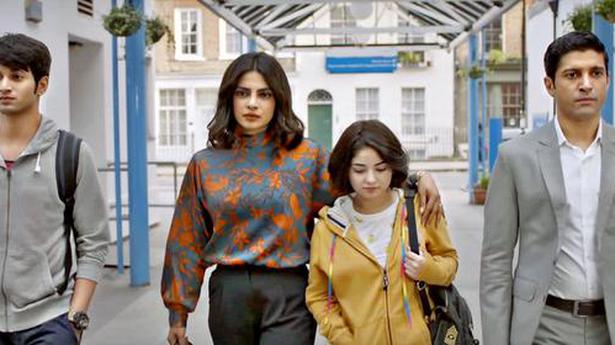 There have been an interesting recurrence of curious phrases across Gulzar songs in recent times. The phrases sound curious, to me since those songs have been my introduction to the particular phrase. For example, there was ‘udan khatola’ that appeared in OK Jaanu (‘Sunn Bhavara’) and Rangoon(‘Mere Miyan Gaye England’), ‘good man di laltain’ across Rangoon(‘Bloody Hell’) and Soorma (‘Good Man Di Laltain’). In The Sky Is Pink – the second full soundtrack that the veteran lyricist has collaborated with Pritam on (the first was Just Married, back in 2007, and there was a partial collaboration in Billu) – the track, ‘Dil Hi Toh Hai’ carries one such throwback, of the word kurpech, that I first heard at the start of the title song of Raazi last year (both times accompanying “path”, incidentally – yeh koochein kurpech hai vs kurpech hai raahein; and going by the context I assume it means difficult).

Like Raazi’s song, this one too features Arijit Singh (alongside Antara Mitra and Nikhil D’Souza) though ‘Dil Hi Toh Hai’ carries a totally different mood. It’s a pleasantly hummable romantic piece that you can instantly identify as a Pritam composition, delivered well by the singers, with a fine chorus to boot. When Singh renders, “na poochho yeh dil hai munshi, magistrate, qazi”, my mind goes back to a metaphor from another Pritam song (written by Amitabh Bhattacharya), ‘dil Akbar ka pota hai’. Singh is replaced by an equally competent Sreerama Chandra in the reprise version. The English cameo by Nikhil D’Souza is a lovely bit, with the harmonies et al – very gospel but sadly too short. Its lyrics are written by Nikhil Paul George, who also handles guitar and choir arrangement, the song’s two highlights.

The phrase ‘naadaaniyaan’ is uttered way too many times for my liking in the first verse of ‘Naadaaniyaan’, but that aside it is an engaging club song. Arjun Kanungo is in fine form leading the delivery, although I wish there was more of Lisa Mishra as well, and not just the two-line cameo she gets here. In ‘Pink Gulabi Sky’, Pritam channels his ‘Badtameez Dil’ mode, but accentuating the original format is the delightful retro swing layer that the composer incorporates here. While most of brass elements (and that lovely double bass) come from Fame’s Macedonia Symphonic Orchestra, there is also some fab work from Rhythm Shaw on guitar and Shirish Malhotra on flute and clarinet. With Shashwat Singh and Jonita Gandhi handling the vocals, there was never going to be a shortcoming on that front. My favourite song from the album is a solo act by Singh.

‘Zindagi’ has a beautiful melody – almost feels like a ghazal at times, though the orchestration implies nothing of that sort. I loved the opening line from Gulzar – ‘zindagi tune kaisa toss khela hai’. The vocalisation here, especially the processing around the humming portions, takes my mind back to another gem that Pritam-Singh gave us a few years back, ‘Phir Le Aaya Dil’.

Pritam-Gulzar’s soundtrack traverses familiar territories, but is an eminently enjoyable work – the best that the composer has done this year thus far.

From the Archive — upholding a rich heritage

For the Chennai music season 2019, The Hindu brings to you the ‘trendsetters’ seriies from our archives – interviews with rising musiciians from the 1990s who are some of the biggest known names in Carnatic music today. here is an interview with Lalgudi G.J.R. Krishnan and Lalgudi Vijayalakshmi, children of the illustrious Lalgudi Jayaraman. Of […]

After nearly five years, actor Ajith Kumar has opted for a more youthful, clean-shaven look for his next film that is now tentatively referred to as ‘AK60’ or ‘Thala60’. A photo of the Nerkonda Paarvai actor sporting a totally different avatar, standing next to swimmer Kutral Ramesh, more popularly known as Kutraleeswaran, has gone viral […]

‘The play was a challenge to adapt’

Even to those who might not have read the 2003 book by Khaled Hosseini or watched the acclaimed 2007 cinematic adaptation, The Kite Runner would likely evoke swirling images of fetching Afghan landscapes and the epic sweep of a generational saga. It’s a bestseller that has sold millions worldwide, and has a name recall extending […]