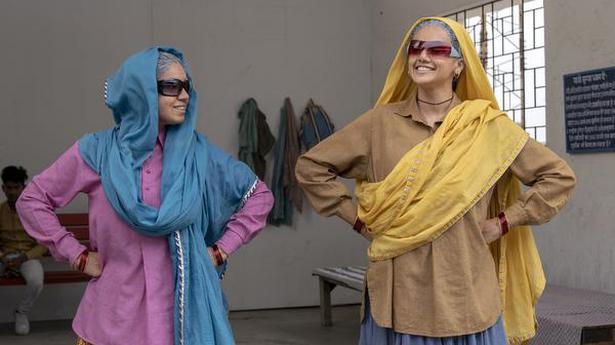 Taapsee Pannu believes life can start at 60. The realisation has occurred because of the actor’s upcoming film, Saand Ki Aankh, based on the lives of Chandro and Prakashi Tomar, two of the oldest sharpshooters in the world. The two women, now in their 80s, saw an opportunity to change the lives of their family members. It was their inspiring, exemplary story that pointed to the endless possibilities of life and the changes that could be wrought through them. “The dialogues and scenes kept reminding me of what my mother has said and done over the years,” recalls Pannu when the script was being narrated to her.

Although the 32-year-old admits her mother’s circumstances helped emotionally relate to the Tomar women, physically transforming into them was a challenge given the stark differences in age, background, lifestyle and experience. In the film, Pannu and her co-star Bhumi Pednekar who plays Chandro Tomar both portray women in their 60s.

There’s been a debate surrounding the casting of two young women to portray older characters to which Pannu alludes to her note on social media. The actor is visibly put out. “I don’t find it valid,” she remarks, emphasising that acting should allow for more flexibility. Going by that logic, she adds, “I should only be playing a 30-year-old Delhi sardarni”.

The preparation to become Prakashi and Chandro Tomar was intense and both actors had to learn to be comfortable in the traditional ‘ghagra odhni’. “I lived for a month with Chandro daadi in her house,” says Pannu adding that she had to learn milk cows, make butter and tend to fields and, most importantly, fire a gun, an endeavour she says she personally dislikes.

It was also imperative to get western Uttar Pradesh’s Khariboli dialect absolutely right. Pannu also mentions the long hours spent in the make-up chair every morning, a process which she says thoroughly tested her patience. “It changed me as a person,” she chuckles.

Moreover, without a male A-lister to secure box office numbers, Saand Ki Aankh signals a perceivable change in perceptions and expectations within the industry. “I wanted a film which is led by multiple women equally and because I couldn’t see one, I decided to do one,” notes the actor. In the same vein, her forthcoming film Thappad, directed by Anubhav Sinha will release on Women’s Day, featuring eight women in a film where, Pannu believes, “every woman in the theatre will relate to at least one character on screen”. Pannu’s choice in projects reflect a stark change to what was told to her nine years ago, when she first began her journey in film. The actor was cautioned that the shelf life of a female actor was generally six to seven years at the most. It was a maxim of sorts that convinced her that after a few years in the industry, she would retire to a quiet life somewhere. But things have changed today. When prodded about her future plans when Pannu’s career graph is clearly on the rise, she says she has no idea. “Today, you can write any kind of role for a woman to lead a film,” she says. “There is no expiry date for an actress now.”

Earlier this month, Saand Ki Aankh was screened at the third Pingyao International Film Festival: Pannu’s first release in China. Then there’s also the fact that the film will release in India during the auspicious time of Diwali. This concurrence, Pannu observes, will ensure that both worlds get to see the film and it has been primarily possible “because the lines have blurred between mainstream and unconventional cinema,” smiles the actor. “Today it’s about good cinema and bad cinema.”

Eye on the tiger

In the middle of the interview, N Senthil Kumaran’s phone beeps a notification and his eyes light up. “Three tigers and 17 cubs have been spotted roaming near Kabini’s tourist area,” he tells me, barely able to contain his excitement. The information came from a WhatsApp group — Indian wildlife explorers — that has 300 […]

I’m being punished for turning 60: Madonna

Singer Madonna has opened up about her fight against ageism in the music industry, saying she is being punished for turning 60. In an interview to British Vogue, Ms. Madonna, who has sold more than 300 million records worldwide in a four decades-long career, has detailed her fight against ageism, reports dailymail.co.uk. “People have always […]