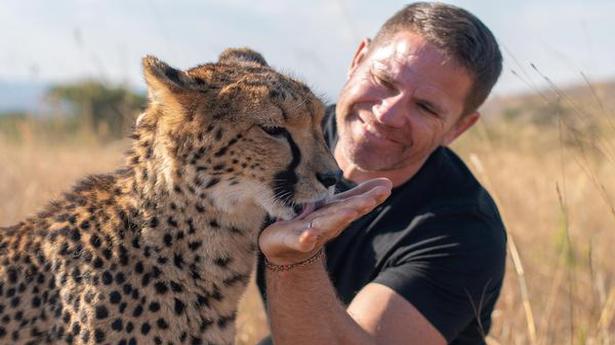 ‘Has Steve Backshall been bitten?’ is one of the most Googled questions about Steve Backshall, a BAFTA award-winning wildlife explorer, best known for his BBC series Deadly 60. For someone who is aware of Steve’s work, the answer to the question is fairly obvious. It is near-impossible to go unbitten in a two-decade-plus career of dealing with the wild. He has been bitten by beings of varied sizes.

Steve recounts his most unforgettable bite. He and his teammates were on horseback searching for an anaconda in a swamp in Argentina. One of his colleagues spotted some movement. They thought it was the snake. Steve jumped down to investigate and felt something around with his feet in the mud. He then stepped on another reptile, which is perhaps as deadly as the anaconda.

“A crocodile just swung around and hit me with its teeth. It took a big chunk off my leg,” he says, matter-of-factly, over a call from the UK. Beyond the bite itself, Steve was more excited about his teammates capturing it. “We had three cameras rolling at the moment. So, the whole thing was captured in super slow-mo from three different directions. I watched that clip like 1,000 times over. And, I thought, ‘What are you doing? You’re clearly treading on a crocodile for goodness sakes!’” He got over 10 stitches on his foot that day. Next day, he was back on the trail again, looking for anaconda.

As you might have guessed from the name, Steve, in the show, goes around the globe looking for the world’s deadliest animals — carnivorous caterpillars, flesh-eating cockroaches, dolphins that threaten sharks and more. But many of these animals that threaten also face the threat of extinction.

“We try to make sure that we have conservation interwoven throughout the narrative,” he explains, “For example, we worked with anti-poaching teams while covering rhinos in South Africa. We worked on plastic rubbish clean-up in Indonesia. So, it is not just about these rare animals, but also about the threats and challenges they face and what can be done to improve their situation.”

Steve doesn’t see conservation as just a part of his work-life. “I made my first conservation series for National Geographic in 2000. Ever since I’ve been finding ways of making my own life as sustainable as it possibly can be,” he says.

Several of Steve’s programs had to be cancelled or postponed this year due to the pandemic. But he does not complain. He and his wife Helen Glover, a double Olympic gold medallist rower, became parents to twins at the beginning of this year; they also have a two-year-old son.

So, despite missing the exploration, he enjoyed being with his young family. In especially tough situations in the wild, the thought of home comforts him, he says. “You always know that it might be a couple of weeks, it might be a couple of months, but eventually you are going to be home and the difficulty will come to an end.”

There is no dearth of challenging situations in Steve’s job. Recently, he was in the Gomantong cave in Borneo, full of bat faeces, flesh-eating cockroaches and venomous centipedes. One wonders, if he, despite the comforting thoughts about home, momentarily hates his work.

His answer partly explains his success as an explorer: “For someone obsessed with wildlife and adventure, to have an opportunity to do this for a living, is just so special.” Despite the crocodile bites, he says, “This is just the best life I could ever ask for.”

The fourth series of Deadly 60 will air from December 2, 9 pm on Sony BBC Earth.

Hollywood icon Al Pacino turns into a Nazi hunter in his web series debut, Hunters. The highly anticipated series will see him go on a murderous rampage. The trailer of the conspiracy thriller, produced by the award-winning Jordan Peele, was released on Friday night and has been garnering quite a buzz. The series follows a […]