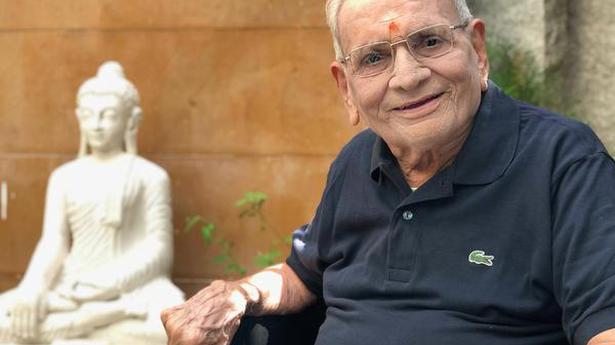 SN Bhatt is carrying a file full of papers when he greets you. They are printouts of dialogue sheets from his upcoming film. Bhatt has been a part of the film industry for a while — having acted in a handful of films, the last being Kaatrin Mozhi — but he is still anxious and eager to be fully prepared whenever he has to go for a shoot.

The 90-year-old has currently been cast in a major role in Aruvi director Arun Prabhu’s upcoming film titled Yazh. “My role is that of a lonely old man who is totally disconnected with the outside world and does not permit anyone to enter his huge bungalow. One day, a couple manages to enter the house, and this meeting brings about a big transformation to his lifestyle,” says Bhatt.

His tryst with cinema happened more than two decades ago — when he starred as a doctor in the 1982 flick Moondram Pirai. Since then, he has gone on to work on a few films, notably among them being Madrasapattinam and Thirumanam Enum Nikkah. “All the roles so far have been of me as a senior citizen. My biggest asset is my close resemblance to legendary director K Viswanath. But I am prepared to do any role given to me with full justice… even if it is a historical role in ‘senthamizh’.”

A regular face in the modelling scene, having starred in multiple advertisements, Bhatt feels that ‘work is worship’. “I have always tried to keep myself active because I believe that a minute lost in life is lost forever. This philosophy also keeps me healthy and physically fit. When I watch films like 102 Not Out, I get very inspired,” says the actor, who also dabbles in music during the weekends.

Bhatt’s health does not permit him to work extensively or travel frequently, but that hasn’t stopped him from giving his best during film shoots. “I consider myself incredibly fortunate to fulfil my dreams even at this age. I only wish to pursue my hobby in fine arts until my last breath,” he signs off.

Catching up with Rinku Rajguru

After Sairat, and its warm reception by the critics and box office alike, a plethora of scripts and film offers came Rinku Rajguru’s way — the young actor refused them all. “I got such a wonderful start with my first film, I felt I had to live up to it. Everyone wanted to do a […]

One always looks forward to a new album by singer-songwriter James Taylor. So I was happy to hear that, he’d released American Standard, a collection of songs from the ‘Great American Songbook’ (a set of popular and enduring songs from the 1920s to the 1950s that were created for Broadway theatre, musical theatre, and Hollywood […]

‘I want to keep learning’

A little more than nine years ago Sonakshi Sinha stepped on to a film set in Wai, Maharashtra, to shoot for Dabbang her debut film. The actor had had no acting aspirations until her first co-star Salman Khan encouraged her to join the family business (Sinha’s parents Poonam and Shatrughan are both actors). It was […]