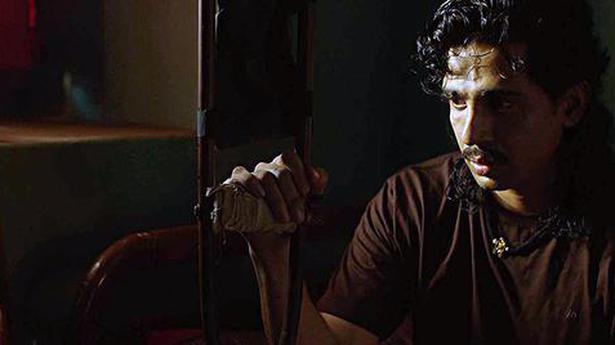 Karan Kulkarni composes a soundtrack that perfectly mirrors the spoofy, unabashedly loony nature of Mard Ko Dard Nahi Hota (MKDNH). For a large part, two of the most “regular” sounding songs both involve the fabulous sounding debutant singer Kamakshi Rai. Incidentally, it’s one of the many high points of the soundtrack, as most of the names involved are relatively new. Rai has Vishal Mishra (composer of albums like Veere Di Wedding and Qarib Qarib Singlle, and now Notebook) for company in the smouldering ‘Tere Liye’. It’s the album’s quietest song penned by Santanu Ghatak, composer-lyricist of the brilliant ‘Rafu’ from Tumhari Sulu.

Both singers deliver splendidly even as Kulkarni composes a haunting, immersive soundscape. Rai does a fine job of her solo act, the retro jazz-flavoured ‘Dreamtime’. Kulkarni, doubling up as a lyricist here, manages to capture all that one expects from a number like this. But the real icing on the cake is Rai’s coquettish delivery. ‘Nakhrewaali’, an apparent ode to the leading lady — starts off sounding like an ambient electronic piece, before the percussion elements (Sanket Naik) kick in. The number is progressively brilliant, seguing from brass band to South Indian, I particularly loved the use of edakka and kanjira. Another brilliant touch is the use of Omkar Dhumal’s shehnai like a saxophone. Kulkarni gets behind the mic for this one, with a whispery cameo from Saba Azad. It makes one wish that Azad’s portion was longer, it’s a pity she doesn’t get more songs in Bollywood.

Before composing MKDNH’s soundtrack Kulkarni last worked on the background score for Tumhari Sulu (2017). Kulkarni gets his Sulu director Suresh Triveni (accompanied by Surya Ragunaathan and Veera Fauzia Saxena) to lead the vocals for the absolute screwball track that is, ‘Life Mein Fair Chance’. Triveni is a complete riot, channelling the yesteryear Hindi playback style of S P Balasubramanyam to perfection — complete with those little conversational touches added from time to time. Kulkarni’s arrangement is a groovy fusion of rock and roll and South Indian folk percussion, a combination that’s reminiscent of Sagar Desai’s work in Quick Gun Murugun.

‘Rappan Rappi Rap’ is practically the musical version of a listicle titled “xx things only 90s kids would remember” — Garima Obrah’s lyrics are teeming with 80s/90s pop culture references, from Star Wars to He-Man to Nirma to Pac Man to Karan Arjun to Devang Patel! Not to be outdone is Kulkarni’s incredibly addictive retro funk arrangement for the piece, I particularly loved the bass line by the composer. The choice of Benny Dayal as singer works like a charm, as he’s clearly having a ball with the number.

It also helps that Dayal has been experimenting with funk in recent times. If you haven’t already, check out Dayal’s band Funktuation — they came out with a wonderful album called Funk Kutcheri late last year, a song from which featured in our Annual Roundup for 2018. The ‘Ude Ude Chale Chale’ hook from the song gets adapted into an engaging electronic rap track written and rendered by Kulkarni, replete with martial arts references in keeping with the song, ‘Shaolin Sky’s’ situational nature (it is a training song, I am told). Kulkarni draws from the standard Bollywood Punjabi dance template to create ‘Kitthon Da Tu Superstar’, though the occasional experimental aspects do show up here too, like the Arabic percussion (darbuka?) and that throwaway trumpet-led reference to ‘Rappan Rappi Rap’. An exuberant Sanj V is the lead singer on this one as well as the Shooter Version of the song where the instrumental passages get longer and the vocal bits are minimal — Dipanjan Guha handles the arrangement for this one.

Kulkarni makes his composing debut for MKDNH in resounding style, with a delightfully quirky cocktail of genres.

Director SS Rajamouli has announced the date for the release of his next magnum opus RRR after the Baahubali series. Starring Ram Charan and Jr NTR in the lead roles, the film which was supposed to hit the theatres on July 26, 2020 has been postponed to January 8, 2021. The makers of the film […]

Superstar Shah Rukh Khan has paid tributes to director Colonel Raj Kumar Kapoor, the man who gave the actor his first break on television in Fauji. The family of Colonel Kapoor announced on Thursday that the veteran director died earlier this week. His last rites were performed at the Lodhi crematorium in Delhi. Colonel Kapoor […]

Alan Merrill, songwriter of ‘I love rock ‘n’ roll’, dies at 69 due to coronavirus

Musician-songwriter Alan Merrill has passed away due to complications from the coronavirus. He was 69. The recording artiste died in New York on Sunday, his daughter Laura Merrill confirmed the news on Facebook. “The Coronavirus took my father this morning. I was given 2 minutes to say my goodbyes before I was rushed out. He […]