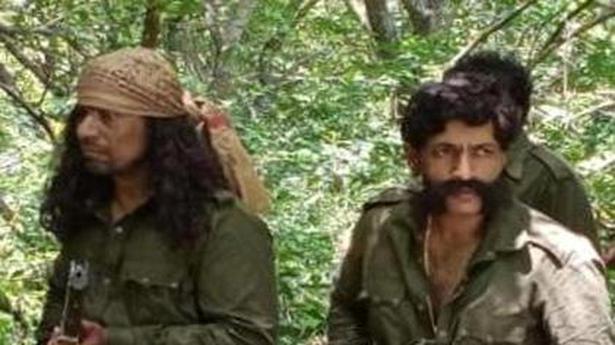 Some stories will always retain their grip on the imagination of the public, with time only fuelling curiosity. The Veerappan saga — where two States spent more than a decade and a half trying to catch a poacher and forest brigand — is one such real-life story.

There seems to be a renewed interest in Veerappan and not just in popular culture. A mega-budget multilingual web series is under production and a retired top cop has come out with a well-researched academic book on Veerappan in Kannada. Sources say that at least two other web series based on the life of Veerappan are in the pipeline.

Kannada filmmaker A.M.R. Ramesh, who is known to make films on contemporary events, had earlier made Attahasa (2013) on Veerappan and the operation that killed him in 2004. For his current project, he has finished the first schedule of the shooting for the web series Veerappan: Hunger for Killing, starring Kishore as Veerappan and senior actors Arjun Sarja, Suniel Shetty, Suresh Oberoi, Vivek Oberoi, Adil Hussein, and Kay Kay Menon in various roles. “We are working to release the first season by March 2021,” said Mr. Ramesh. The series is being produced in Kannada, Hindi, Telugu, and Tamil.

Meanwhile, former Director-General of Police D.V. Guruprasad’s book Dantakatheyada Dantachora: Operation Veerappan: Pratyakshadarshigalu Kandante, also doubles up as a biography of the brigand — something no one has attempted till now. “The research for the book took one and a half years and I have interviewed over 300 people, including Veerappan’s family, residents of his village, and several policemen, making it one of the most authoritative books on the subject,” Dr. Guruprasad said.

So why is the Veerappan story still relevant and why does it hold the audience enraptured? Both Mr. Ramesh and Dr. Guruprasad seem to be keen to record the events, as a documentation and perhaps as a cautionary tale. “Come to think of it, there are many parallels between Veerappan and the drug lord Pablo Escobar of Colombia. We need to analyse what led to his rise and what were the failures of the state,” said Mr. Ramesh.

Dr. Guruprasad approached the subject like an academic research project with two questions: how did a small-time poacher grow into a dreaded criminal and why did two States, despite their resources, fail to catch him for over a decade and a half? “I want the book to be read like a textbook by policemen and administrators alike. I have tried to analyse why our police failed. Lack of coordination and sharing of intelligence, and not engaging with the forest seemed the main reasons. It is an academic exercise,” he said.

But at the heart of the story, the Veerappan saga is a human drama, of a man’s rise to infamy, his greed and bloodlust, and the intersection of tribal and language issues. It is a multi-layered and complex narrative to the age-old police and robber tale.

The richness of Islamic theatre

A classroom debate moderated by this writer last week, with students of drama, brought to the fore misapprehensions regarding what one might term ‘Islamic theatre’ in India. The phrasing itself was called out as parochial in its scope, or too strongly affiliated with religious identity, and some even questioned the need for such a classification […]

Filmmaker Quentin Tarantino and his actor-wife Daniella Pick have become parents to a baby boy. A representative of the couple shared the news on Wednesday in a statement to Page Six. “Daniella and Quentin Tarantino are happy to announce the birth of their first child. A baby boy born February 22,” the spokesperson said. The […]

RJ Balaji and NJ Saravanan’s part-comedy, part-social drama and part-Amman film, is well-intentioned and has several LoL scenes, but doesn’t come together as a whole Barring the traditional battle of Good versus Evil template, what gave an edge to the Amman subgenre of the ‘90s was the OTT entry of Amman (invariably played by Ramya […]