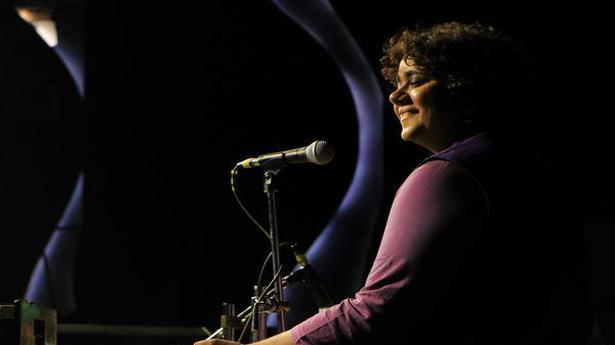 My first introduction to Shruthi Vishwanath’s music was through a YouTube video. Her open-throated vigorous singing of Sant Gyaneshwar’s ‘Fugadi Fu’ became an earworm and later I found another very appealing rendition of the popular Carnatic kriti ‘Krishna Nee Begane Baaro’, and I was hooked.

Over a phone conversation, Shruthi, who will present a concert titled Mystic Music in Pollachi, explains that she learnt Carnatic music in Pune “and then spent some time trying to fit into the system in Chennai.” When that didn’t work out, it led her “to fundamentally question what classical music was and why I wanted to pursue it.” As she began exploring different kinds of music, she realised her own practice was an amalgamation of different things. So for the last six to seven years, her attempt has been “to combine the visceral nature of folk and Bhakti music and combine it with the intellectual rigour of my classical background.”

What she is trying to achieve is a meeting of the two worlds while keeping her voice “authentic”. She says wryly, “Even now, when people hear that I sing Bhakti poetry, they say, ‘oh so you sing bhajans!’”. There’s a pause and then she continues in a calmer voice, “Even the word bhajan, as we understand it today, has been taken and appropriated by certain people to suit their context. Bhakti poetry was supposed to be for everybody; it was layered, nuanced and rebellious… everything in one. My practice is: how do I celebrate that both through the poetry itself and through the music. So my work is a fluid medium that tries to capture the heart of musical and spiritual experience when they come together.”

She describes her move into folk and spiritual forms as “very liberating”, especially after being in a classical one for a while. “Suddenly your practice goes from intellectual to far more visceral, lived and felt. It is all about exploring boundaries and seeing how one can work across forms while being true to oneself.”

She has recently begun to shift towards more of her own compositions. “I still sing some pieces composed by others, especially Kumar Gandharva’s Nirguni music. I interpret those as he gave it.” For her own work, the process involves “a lot of gut and instinct.” She explains, “I sit with the poetry for a long time and let it sing. This began when I was working on my project on the Warkaris (women poets who wrote abhangs). Not all of these are written texts; they’ve been sung first and notated later. So I am sort of going backwards.”

Often the musicality and ornamentation cloud the essence of the poem, so “one has to let the poetry speak. This is not Carnatic music,” she repeats the word “not” for emphasis. “It’s one way to reach the pinnacle where words and music meet. I try and do that as much as I can.”

Her programme in Pollachi (hosted at Dr. Arun Sharma’s Nature Care Camp) stemmed from the feeling that the music that emerged from the syncretic nature of the Bhakti and allied movements must be presented as such, especially in current times. “I’ve done programmes earlier on abhangs by women poets or only on Kabir. But more and more I feel that kind of thing may not be so great for today’s environment,” she says earnestly, “because we need to dialogue across cultures, languages and find out what makes us human. For me, Bhakti and Nirguni poetry is a reflection of that. So what I’ll be presenting is the nature of mystical experience across different genres: Warkari, Nirguni, Baul, Punjabi Sufi … it will be a musical exploration of poetry from across India.”

‘I want people to see Shikara without any prejudices’

The exodus of Kashmiri Pandits has been frequently been used for political whataboutery while discussing the current lockdown and reports of human rights violation in Kashmir. Already surrounded by controversies, Vidhu Vinod Chopra’s Shikara sets out to navigate this tricky subject, with an intent to provide “healing” to Kashmiri Pandits. Ahead of its release this […]

The many faces of Nawazuddin Siddiqui

In just this calendar year, we’ve seen Nawazuddin Siddiqui showcase his range as an actor that would take others a lifetime. Regardless of the politics of Thackeray, there’s no denying that the actor capturing the magnetism of the late Balasaheb Thackeray, slipping effortlessly into the late politician’s skin. In Ritesh Batra’s utterly charming Photograph, Siddiqui […]

“Chennai…Thamizha!” called out A.R. Rahman to the cheering audience as he began his live concert on Saturday evening. Throughout the evening, the music composer took the audience at the YMCA Grounds, Nandanam, through a mix of his old and new hits. While the concert began with the Tamil anthem Semmozhiaana Thamizh mozhiyam, Rahman then launched […]