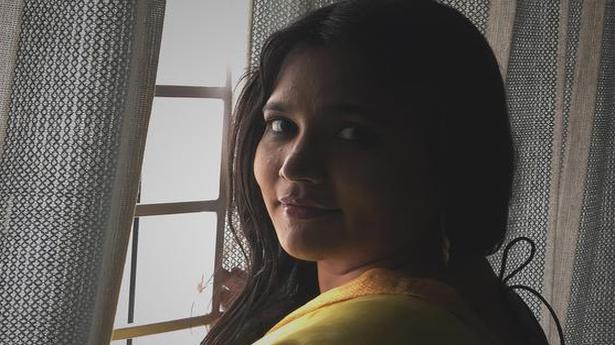 Vinodhini Vaidynathan is yearning for a paranormal experience. “I really wish a spirit was sitting right between us, listening to our conversation,” she tells me, as I frantically peep at the empty chair, before setting up the interview. For the outside world, Vinodhini may come across as yet another character artiste, swimming against the tide called Tamil cinema. But for those who watched the recently-released Game Over, she has become their friendly neighbourhood Kalamma (the character she played in the movie), to the point where ‘everybody needs a Kalamma’ is now a legit meme material on social media. Ask Kalamma, sorry, Vinodhini about her current mindspace post Game Over, she grins saying, “The response has been heartening.”

However, Vinodhini has largely been getting polarised reactions for her character of a domestic helper, who, by her own admission, literally and metaphorically cleans up Swapna’s (played by Taapsee Pannu) mess in the movie. A large part of her friends couldn’t accept her playing an older character, that too of a caretaker -— something even director Ashwin Saravanan was skeptical about initially. “I’m neither elite nor a gramathu ponnu. Maybe I’m somewhere in the middle ground, which is why Ashwin too wasn’t convinced and insisted that we try look tests,” she says. The other side of reaction came fully from an acting point of view, where people felt that there was more for Vinodhini to bite into in Game Over. “There’s a certain metre with which I perform and deliver my lines. But the process becomes repetitive after a point because you aren’t offered good roles. Very few directors are keen on extracting performance from actors. Since I come from a theatre background, directors mostly expect me to do something,” she says, about the brief given to character artistes, adding, “In that sense, OK Kanmani, Kadal, Aandavan Kattalai and Game Over are a few films, in which I was directed.”

Having watched Game Over, it felt as though the makers were adamant about casting Vinodhini in that role. “Producer [Sashikanth] was particular to cast me. So, when I came on board, they made efforts to increase my screen time. The final version had a lot of scenes that were not part of the first draft.” I ask her about the most-talked-about scene in Game Over, where Kalamma accompanies Swapna to her therapy session.“It appealed to me because I underwent something similar in life. You’d often find this in society; the lady of the house would take her cook/maid to the grocery store.”

In a way, one could argue that Kalamma is a guardian angel of sorts for Swapna. But Vinodhini offers a fresh insight into the character’s psyche.

“I think she [Kalamma] is trusting herself on Swapna, even to the point of being intrusive. Look at her wandering around all the time. If I were Swapna, I would lash out at her,” she laughs. About how she understood the character, Vinodhini says it’s “Kalamma’s maternal instinct that is urging her to do these things”. She goes on to add: “I perceived Kalamma to be a buffer between the outside world and Swapna. Anyone who tries to intrude into the house has to pass through Kala. And that actually happens twice.”

The fault in our stars

“Why haven’t you asked me about my acting technique?” asks Vinodhini. And she has a valid point. Rarely do we ask character artistes about the process that they employ to play the character. Vinodhini’s method is simple; she has a repertoire of experiences from which she draws inspiration from. She explains, “I employ and recreate these things before the shot. As an actor, I think it’s important for me to switch on and off from the character.” So, what does Vinodhini look for in a script? “Firstly, I look for the script,” she laughs, adding, “I have had experiences where they would send me just the dialogues. Invariably, I go to the sets clueless about the scene or situation.” If that’s how the industry operates, then why be part of that film in the first place? “See, this is the system and I’m not here to change it. At the end of the day, I love acting and I need funds for my theatre production.”

She has built a reputation of stealing the spotlight from her co-stars, even if she appears only in two scenes. A film that comes to mind is Jigarthanda, in which she played a minor role, “I literally came for two scenes in that movie,” she laughs, “Can anybody make a film without character artistes? But the disparity between lead actors and supporting actors is something that needs to be spoken about.” Has she ever been introspective as to why she’s being repeatedly cast in minor roles? And the answer is a resounding “no”. “People prefer known faces even for smaller roles. The directors probably feel that they add weight to the script, which is true. There’s no way you can chart your career, especially if you’re a character artiste.”

Vinodhini, though, admits that it’s frustrating sometimes. “The sad part is; before you sink your teeth into it, you are done with the shoot.”

A few good women and men

Abir Abrar, Sounding Vanya In this free-wheeling dismantling and restructuring of Uncle Vanya, Abrar plays almost every part, yet she is an entity with a narrative all of their own. She owns the play’s emotional highlights and whips up intensity in spades, and even when she recedes to the sideline, she is a smouldering presence […]

Come December, and there’s a hum in the air in Goa. The movie stars have left (after the International Film Festival of India) and the cultural stars are gathering, with the Serendipity Arts Festival (SAF) right in the middle of it all. As art critic and curator, Ranjit Hoskote, told us last year, “It is […]