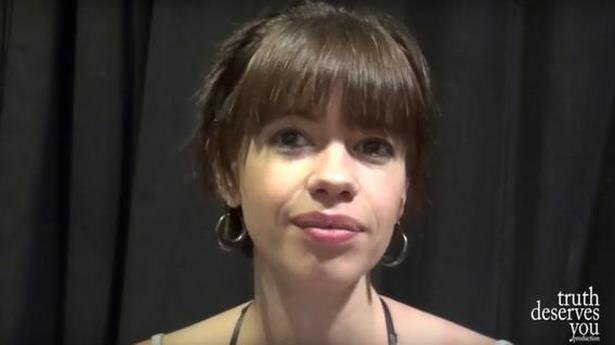 After written appeals by filmmakers, authors, scientists and theatre artistes, it’s now the turn of celebrities, mainly members of the Hindi film fraternity, to take to short videos to urge people to vote with care and concern for the country and its people. ‘Vote Sambhal Ke’ (Guard your vote), is the implicit advice. The two-to-three minute-long videos, up on YouTube, have been directed and edited by former journalist turned scriptwriter-filmmaker Satyen K. Bordoloi.

The series kicked off with actor Kalki Koechlin asking people to think before voting. “Vote right, or vote left, but vote with deliberation and purpose,” she says, before going on to recite the last few lines of the poem — “Man, You Should Explode” — by Marathi poet, writer and Dalit activist, Namdeo Dhasal.

And coddled by them everybody should bask in mutual love

Man, one should act so bright as to make the Sun and the Moon seem pale

One should share each morsel of food with everyone else, one should compose a hymn

To humanity itself, man, man should sing only the song of man.”

In the second video, writer-director and actor Tigmanshu Dhulia talks about how there can be no bigger religion than the nation itself so one must vote for someone who wouldn’t destroy India’s social fabric. He urges the young to be alert, vigilant, thoughtful and vote while keeping real issues — like employment and right to a dignified life — in mind. He also warns that one must vote to ensure that we keep having elections in the years to come, and that 2019 election should not turn out to be the last one.

More video with the likes of filmmaker Vikramaditya Motwane, writer Anjum Rajabali, writer-costume designer-art director Shama Zaidi, musician Vishal Dadlani, filmmaker Saeed Mirza, and actor Swara Bhaskar, among others, will follow in the next few days in the lead up to the first phase of elections on April 11. Apart from the individual videos, Bordoloi will also make a 10-15 minute-long mash-ups of the various issues raised in each of them.

‘The film fraternity is not political enough’: Bordoloi had been hearing this complaint time and again. “There is this perception that they [film fraternity] don’t know about issues, that they don’t talk and have an aversion to take a stand publicly. But the truth is that they are very aware and articulate. They are seen as entertainers and not asked the right questions,” he says.

Bordoloi decided to talk to them without bringing any specific political party into the conversation. They don’t just talk about this election but also their idea of India, what the country should be like. “What they talked about surprised and inspired me,” says Bordoloi.

The videos are streaming under the umbrella ‘Truth Deserves You Production’ on Bordoloi’s YouTube channel where he has been filming and uploading footage of various activist movements in Mumbai and parts of Maharashtra that are not covered and documented widely. The footage of these election videos can be used freely used by anyone under common creative licence.

Even as the video began streaming, several Bollywood notables were seen wading into political debates on social media on Sunday. Filmmaker Mahesh Bhatt put up links to the two sections (that are now showing on YouTube) of Anand Patwardhan’s Vivek, a sprawling eight-part documentary on the increasing radicalisation of India. The two available sections talk of the life and work of rationalist Dr. Narendra Dhabholkar and communist leader Govind Pansare and raise questions about their assassination. Meanwhile, actor Renuka Shahane diligently fielded questions on voting and democracy on Twitter, without aligning herself with any party and ideology. Actor Soni Razdan took to Twitter to question her colleague Anupam Kher on his issue with artistes aligning themselves with the opposition when he himself had chosen to openly line up with the present government.

Slug: Film Review The new Addams Family movie is short, has extraordinary animation, stunning visuals, a starry voice cast, some vanilla gags and is eminently forgettable. On their wedding day, Gomez Addams and Morticia are driven out of their standard issue creepy Gothic hang out by some ludicrous villagers who seem to have strayed from […]

Avengers blast past Titanic to all-time No. 2

Disney and Marvel’s Avengers: Endgame has stormed into historic territory, earning $2.19 billion worldwide in less than two weeks to become the No. 2 film of all time, industry watcher Exhibitor Relations has reported. That exalted number, which includes the film’s estimated take of $145.8 million this three-day weekend in North America, pushes the superhero […]

Why Kamal Haasan’s ‘Mumbai Xpress’ failed to make the cut

Three small-time crooks, let us call them A, B and C, plot to kidnap the son of a wealthy businessman, with meticulous research and rehearsals. Blame the fault in their stars, they face a setback for every step they take. First, C falls sick and turns in his brother-in-law D, or the new-C. Both A […]