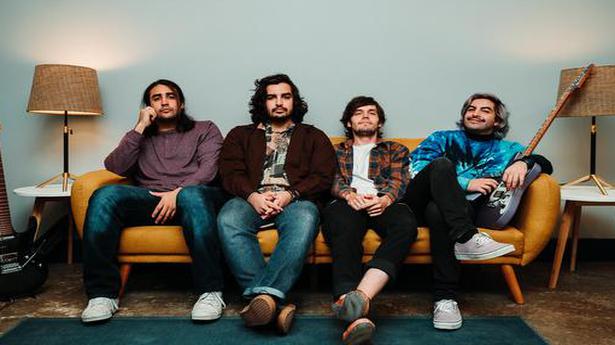 From dogs skateboarding to breathtaking footage of nature in bloom, Californian rock band Chon’s sonic and visual aesthetic is mostly about being laidback. Borrowing from progressive rock, math-rock and even a bit of jazz and funk, the band’s guitarist Mario Camarena says that their live shows, however, are likely to have mosh pits and crowdsurfing.

Ahead of their India debut tour – which includes a stop in Bengaluru on February 11 at Fandom at Gilly’s Redefined – Camarena says over the phone, “Live, it is a little different. We play really loud. I think that is something that you notice more live. Like, when you can really feel the bass and the kick drum, and you hear how hard we are playing. I think you just get a feel for the energy we give out a little better live. And I think that translates to the crowd and that is why they want to go crazy too.”

Although there is barely any singing in Chon’s hypermelodic discography, Mario does like to have a mic in front of him just to get the crowd going. “We always call out the crowd. I love asking the crowd to mosh, crowdsurf and all that stuff. We started doing that as soon as we started playing shows. I think it just kind of caught on and our fans just started to know, oh, you go to a Chon show, you can go crazy.”

Mario was on the phone from Kyoto, where Chon – completed by bassist Esiah Camarena, drummer Nathan Camarena and guitarist Erick Hansel – have just kicked off their Asia/Australia tour. Mario says about Japan, “We kind of feel at home here by now. Every time we come, we have friends with us who have either lived here or just know their way around, which is pretty nice. So it is nothing too crazy.” In addition to India, they are also making their début in Thailand and New Zealand this month, bringing their trippy, intricate and groovy rock sound to new audiences.

While Chon have had decent success in the decade that they’ve been active, it takes serious funds to make an international tour happen for any band with a niche following. Mario says the band realised early on how things like merchandise sales would be a big help and it is something they focus on.

The guitarist recalls, “When we started out making merchandise in the U.S., we honestly didn’t know what to expect from our first tour. We had guarantees from the shows, but we had no idea what merch sales would be like on our first tour. We sold out really fast. And we are like, ‘Okay, this is actually a huge deal’. This is how bands make money.”

From “crystal peach” T-shirts to tie-dye designs and bright striped tops and a lot of solid colours which go beyond the usual spectrum of black, Chon certainly put a lot of effort and time into their design and collaborations with other artists.

The merch also evokes an easygoing aesthetic, much like their music. While it might be understandably tricky to nail all the melodies and lock in to time signatures, Mario says the band loves to throw in little intricacies – a melody that gets stretched or a harmony going into overdrive – to keep things fun for themselves as instrumentalists. He uses the example of a song like ‘Bubble Dream’ saying, “The best possible thing you can do is to try to make yourself laugh or try to make your friend laugh, who is next to you. Something like that takes a lot of pressure off, plus you end up making just as cool stuff.”

The setlist will likely include ‘Bubble Dream’, songs off their albums Grow and Homey, plus their 2019 self-titled record. Mario adds about their India trip, “I am stoked to play. If anyone who is coming to our India shows and is reading this, thanks for coming and supporting. We are all stoked.”

Avengers blast past Titanic to all-time No. 2

Disney and Marvel’s Avengers: Endgame has stormed into historic territory, earning $2.19 billion worldwide in less than two weeks to become the No. 2 film of all time, industry watcher Exhibitor Relations has reported. That exalted number, which includes the film’s estimated take of $145.8 million this three-day weekend in North America, pushes the superhero […]

Jugalbandis for the win

It’s always a pleasure to listen to Pandits Rajan and Sajan Mishra, perhaps India’s most accomplished vocal jugalbandi duo. I first heard them as a teenager in 1977, and even without understanding the nuances at that age, was impressed by their coordination. The brothers performed at the Pandit Chatur Lal memorial concert held at the […]

From the first Dilwale Dulhania Le Jaayenge inspired scene to the last, the “Ja Simran, jee le apni zindagi” dialogue uttered by an equally stern Bauji (patriarch) and an Aashiqui-inspired image of young love thrown in the middle. It’s evident what Hitesh Kewalya is doing with what could, perhaps, be the first unabashed same-sex love […]