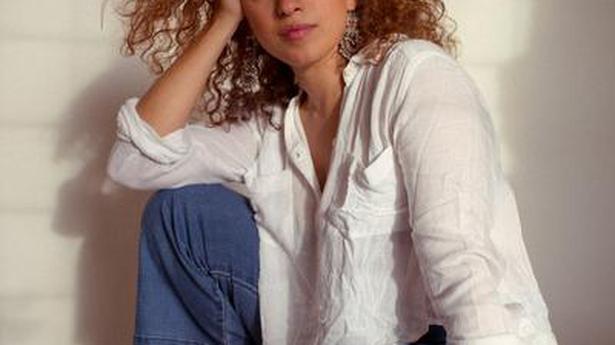 Actor Sanya Malhotra peers from behind the posters of her forthcoming release, Photograph, and realises that she has been found out. The actor clicks her tongue, disappointed that she can’t begin our chat by leaping out and startling me, and settles down in a chair for the interview with The Hindu.

Between this playful and giggly demeanour, and her confident dance moves, one wouldn’t think that Malhotra is particularly shy or reticent. But director Ritesh Batra has talked about finding his quiet Miloni, the protagonist of Photograph, in her. And considering Malhotra felt at home ensconced in her character’s skin, the process spurred the actor to reassess her long-held perceptions of herself.

“I used to feel that I talk a lot and annoy people. I realised that I’m quite introverted,” says the actor, sharing that her friends had already discerned that about her. In unpacking her complex character, Malhotra found bits of herself — “a calm exterior, [Miloni seems like] she’s in her own world, [but] she’s very attentive, though she doesn’t verbalise her thoughts.” Her character’s first line only comes 30 minutes into the film, but Malhotra’s careful treatment of the demure, middle-class CA student has already sparked interest in the actor during its world premiere at Sundance Film Festival, and its European premiere at the Berlinale. The 27-year-old was even listed as one of the ‘Five Breakout Talents to Watch from the Berlin Film Festival’ by The Hollywood Reporter. The messages that flooded her phone after this made her realise it was a big deal. She laughingly says, “My mother was happy, so I was happy.”

Malhotra was left awestruck much earlier, when Batra of The Lunchbox (2013) fame contacted her after her debut, the 2016 hit Dangal. After reading Batra’s script — the story of a street photographer (Nawazuddin Siddiqui as Rafi) who asks a stranger to pretend to be his fiancé to assuage his ailing grandmother — Malhotra went for a long run before she affirmatively mailed him. Sitting cross-legged on her chair, Malhotra laughs and reveals that all she was thinking on her run was “Itni achhi script kaisi mil gayi mujhe? (How did I get such a good script?)”

Describing his script as a delicately-written novel, Malhotra says Batra steeps the film’s emotions in realism despite the premise seeming far-fetched, allowing the actors take the reins of their characters. “Before every shot he would tell me, ‘Take your time’ — [that was] his takiya kalaam (oft-used phrase),” says Malhotra, adding that she often chose to stay silent in scenes — refusing to get caught up in the structure of dialogues when words were unnecessary. “If you’re not listening to your co-star, then it’s not a conversation,” she says. Miloni stands in contrast to her performances last year in Vishal Bharadwaj’s twisted Pataakha and Amit Sharma’s light-hearted Badhaai Ho. But Malhotra explains how each of them interested her, “These [are] four very powerful characters, independent in their own way.”

While Miloni makes the odd choice of playing Rafi’s fiancé just “to try something out”, Renee serves as the voice of reason in Badhaai Ho, and Pataakha’s Chutki dreams of becoming a teacher. “All these characters are characters we see in real life. I’m glad that people are writing [them] in Bollywood now. These are the women we want to see on screen, not like the damsels in distress – we can fight on our own,” says Malhotra.What stands out with her experience on Photograph is how she was forced to relish each moment as it comes – much like how Rafi promises passersby and tourists that his pictures will frame their transient but precious memories. Shooting for the film, from Colaba to Behrampada, meant a rediscovery of Mumbai for the Delhite. “I used to read Manto a lot,” she says about the Urdu writer whose muse was Bombay of the 1930s and 1940s, “I’d imagine Manto’s world.” Only later did she learn that coincidentally her co-star on the film was headlining Nandita Das’ 2018 biography on the writer. Away from interviews and film promotions, Malhotra likes nothing better than unwinding with books and Laila, her adopted Persian cat. A speedy reader, she’s currently immersed in Min Jin Lee’s Pachinko – a saga that covers generations of a Korean family that immigrates to Japan. “It’s depressing, but beautiful,” she shares.

What does it take to become a musician? IndiEarth XChange breaks it down

For the past seven years, IndiEarth XChange was an event that Chennai’s indie music lovers would look forward to, for their annual dose of musical talent from Reunion Island, Germany, France and around the world. Often, it also proved to be an education in music from different parts of the country. This year, however, things […]

There’s a scene in Maska where the lead Rumi (Prit Kamani) is ticked off by a judge, Boman Irani (playing himself) in an acting competition. All for trying too hard to act — zyada hi mehnat (don’t overdo it), as he puts it. The film — about Rumi wanting to let go of his family […]