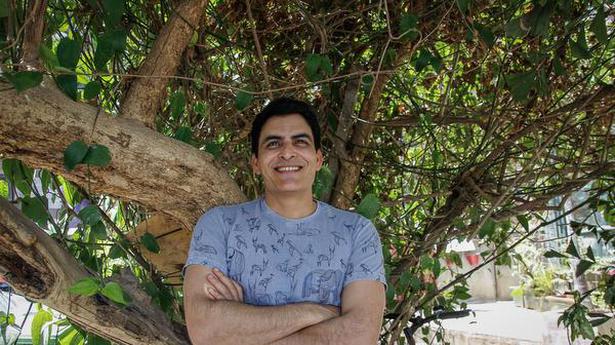 Actor Manav Kaul is a bundle of contradictions. One moment Kaul is biting back his indignation, at the subpar treatment of the arts in the country. In the next, the actor sports a Zen-like smile while explaining that he doesn’t enjoy getting political or aggressive on social media. “We should create as much [happiness as we can] around us,” he says.

We meet in the bustling Versova Social to talk about his release this week — Albert Pinto Ko Gussa Kyun Aata Hai? (APKGKAH) which is based on the 1980 cult classic directed by Saeed Akhtar Mirza. Between sips from a large mug of coffee, Kaul admits he only has a vague recollection of Naseeruddin Shah’s portrayal of the working class character, Albert Pinto — an angst-ridden mechanic whose father is a mill worker. The actor says that he avoided revisiting the film. “I love him so much,” Kaul says about Shah, “[He] is one of the finest actors we have in this country. So even if I try [to borrow from his performance], I won’t be able to. Because he is amazing.” Under Soumitra Ranade’s direction, Kaul says his Pinto’s anger is directed towards contemporary societal structures and issues. “The anger is the same. It will upset you a bit, it is grim. We are changing a lot as a society [and] as a country — it’s high time to release this film [during] this election.” The film is about Pinto who decides to disappear from his house one day, leaving behind an anxious girlfriend, brother and mother. Without divulging too many details, Kaul talks about how Pinto’s journey unfolds on a road trip from Mumbai to Goa.

Discarding the usual notes of self-discovery found in the shooting of such a journey, Kaul explains, “The film [was] shot in absolute heat. It’s summer, [we’re] on the highway, the jeep is hot as hell without a roof, we are having beer, [Pinto] is angry [and] wants to kill someone. It is stifling!”

After creating a buzz at the 2016 Film Bazaar and bagging the Audience Prize for Best Film at Singapore’s South Asian International Film Festival, the wait has been long. “It’s very a difficult [film] to sell. It’s ‘who is Manav Kaul?’ basically,” shrugs the actor. “We don’t have enough theatres to make sure parallel cinema exists in theatres,” Kaul avers. The actor feels that the arts, beyond just film and theatre, are ignored in the country. Kaul turns exasperated, “I get very angry that we don’t understand art or artists at all. We don’t [care] about what artists think, feel, or have to say.”

He recalls veteran actor and filmmaker Amol Palekar’s speech at the National Gallery of Modern Art (NGMA) earlier this year when he attempted to criticise the scrapping of an advisory committee of local artists, and the shifting of control of the gallery entirely to the Ministry of Culture. Palekar was interrupted numerous times and his speech was truncated.“I hated the fact that they shut Abhishek Majumdar’s play,” adds the actor, referring to Majumdar’s play on stone-pelting in Kashmir Eidgah ke Jinnat being cancelled at Jaipur’s Navras Festival. “We have to have every story up on the stage,” stresses Kaul, “[whether] you like it or not.”

Kaul is a Kashmiri Pandit, and he has often spoken about how he took up odd jobs as a child in Hoshangabad, Madhya Pradesh. From teaching break-dance (he demonstrates a few moves, and jokes about being surprised that people were willing to pay to learn from him), to selling goli biscuits (“I had a fight with a guy who stopped selling me goli biscuits, so [out of vengeance] I opened a biscuit shop in front of him”), Kaul now realises he wanted to escape the small town he was growing up in.

Discovering his love for acting, and a few spontaneous decisions later, he found himself in Mumbai in 1998 continuing his pursuit of theatre. Kaul trained under thespian Satyadev Dubey, and was even getting a steady stream of work. “In 2002 I was doing seven plays — almost [the] lead role in each,” shares Kaul as he gets his second mug of coffee ready, “But I found [it to be] bad theatre, bad writing, bad direction. I remember at Prithvi there was a houseful show and I was delivering a monologue. And I thought to myself that if I would’ve been in the audience, I would’ve left.” So Kaul left acting, locked himself up at home, watched a lot of Wong Kar-wai’s films, and read. And eventually in 2004 he staged his debut as a playwright and director with Shakkar Ke Paanch Daane. “And that play worked. And I thought, ‘Thank god, there’s something I can do!’” he laughs. But a decade after it first happened, the disillusionment struck again. “I got bored of theatre,” he admits, adding that he felt he had become predictable to himself. And that began his tryst with short stories.

With three books to his credit – Theek Tumhare Peeche, Prem Kabootar, and Tumhare Baare Mein — Kaul plans on adding another short story collection to the list and a collection of his poems as well. As for his plays, Kaul has always published them online for free. “I don’t feel like I’ve written [them]. I’m a different person right now, so how can I own [them]?” he says simply.

The actor will next be seen in a Netflix film Sarthak Dasgupta’s Music Teacher and another web series he is excited about but can’t talk about. He also hopes that by next year his second directorial venture (after the 2012 Hansa) called Tathagat will be ready.

Despite a low success level of late, Raj Tarun has kept his spirits up. Post Lover in 2018, he signed only two films — Iddari Lokam Okkate and Orey Bujjiga. He shares, “After the release of Lover, I had a vow to fulfil so I got my head tonsured at Tirupati. I took a real […]

A return to the senses

Spending time at Rana Begum’s exhibition is an experience akin to cloud-gazing, watching the sea, or observing one’s surrounding with a discerning eye. Begum’s ostensibly straightforward renderings of form and colour come alive, transforming as the daylight illuminates her works. With her new work, the British-Bangladeshi artist strays from her characteristic geometricism and flat applications […]

When singer and composer Sangeetha Rajeev walks in, her infectious smile lights up the room. With over 1,000 live performances to her credit, in India and abroad, Sangeetha is also a well-known playback singer in Karnataka and has recently made a foray into the Telugu film industry. A juror on Zee Kannada’s singing reality show […]