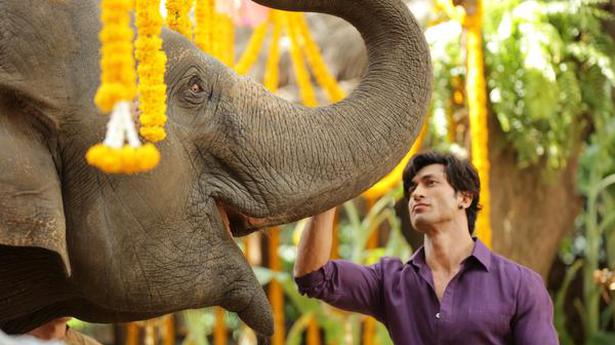 For American director Chuck Russell, India has always meant elephants. Russell’s late mother was a travel agent who loved India and there were always artefacts and photographs that featured elephants in her home.

It’s fitting then that the filmmaker is making his Bollywood debut with an action adventure that stars real-life elephants. He says that Junglee is, “A universal film about coming home to nature, coming home to the jungle, and then finally fighting for it.” Vidyut Jammwal, plays a veterinarian who returns to his father’s elephant reserve to encounter and fight an international poacher’s racket. “The only way for me to do this story was to make it in India and in Hindi,” says Russell.

The director has grown up reading Tarzan books, so the fantasy of the jungle was always a “big deal” in his life. “When I moved from the [American] Midwest, which was all flat corn fields, even the concrete [jungle] in California was exciting to me,” he jokes. As a kid, he saw Robert J. Flaherty’s Elephant Boy (1937) based on Rudyard Kipling’s Toomai of the Elephants, in which the young Indian actor Sabu Dastagir interacted with real elephants on screen, making “the fantasy of a kid roaming around with an elephant,” a part of Russell’s childhood.

“I love international casts and bringing them together in an adventure movie,” shares Russell. The reason for him to do a “100% Hindi film,” was its crucial subject matter. He saw it being made not just for Hindi audiences but for a global one. “People who are watching documentaries on the elephant population crisis are already interested,” says Russell, so the aim was to make a fun adventure movie on the subject.

“I made two of the elephants characters in the film — as important as the other [human] characters,” he shares. Even though he loves using technology, there is some part of him that is “sad to see kids watching detailed CGI animals”. Russell chose to use real elephants as opposed to computer-generated ones. He explains, “Empathy with real elephants is part of India’s DNA and a relation that is centuries old. The absolutely amazing part of this film is the relationship we built between Vidyut and Bhola [the elephant]. We spent months with these animals and captured a real relation[ship] on film.”

But given the current discourse on animal welfare in cinema, does he anticipate any objections? “I have no control [on the reaction of animal welfare groups] but I hope they embrace the movie. My first thought is always the animals themselves, and even though, in part, I pioneered the usage of CGI, a wonderful tool, in The Mask, the fact is now in movies we only anticipate all these CGI animals. It is creating a synthetic barrier.”

Russell has worked with real animals — the dog in The Mask and the camel in The Scorpion King. He says, “It brings out the vulnerability and the naturalism,” in his actors and his love of animals makes him take every precaution. While working on Junglee he knew the trainers were working with the animals based on positive reinforcement. “A happy animal will do something special in the performance, and I teach my actors to improvise off the animals. We are not doing tricks but rather trying to create genuine scenes.”

Russell worked with mahouts and elephants directly, in their natural habitat, and only during the day, two hours at a time, and never once outside their conservation centre in Thailand. With strict protocols in place, Junglee uses special effects to create a sense of jeopardy, making day look like night and changing the background setting which in reality was always the conservation centre. “I was there for every one of these scenes and I know those two elephants. They work for organic apples and love. And we worked with their herd without breaking it up. There was never any loud noise around them. That was all special effects”, he shares while adding, “I didn’t accept the movie till I knew there was a way to shoot with comfort for the animals.” The rule, he says, was “happy elephants”.

For Russell, “to actually to be there” was an incredible experience. “[The elephants] are very social and family oriented, they mourn the loss of one of their herd. All of this helps people to relate to their crisis. Then why would anyone buy ivory?,” he asks.

Lure of the story

Did shooting in Hindi and coming to Bollywood pose a challenge? “There is an old saying that the story chooses the teller. I always knew there are going to be language challenges,” he shares. He gives a lot of credit to his “wonderful Indian artists”: that is from the translators and co-writers on the screenplay, to actors, and “the incredible” music and art direction. For all practical purposes, Russell had his script and rehearsals in English which were then translated to Hindi.

About Junglee Pictures he says, “There is more of an independent spirit with them and that’s my roots anyway. What I am scared of being standardised [in Hollywood] is the kind of movies that are being made. It is harder and harder to do original films.” For Junglee, Russell worked with a smaller crew, a more mobile camera and a cast that includes Atul Kulkarni, Akshay Oberoi, and Pooja Sawant. Russell enjoys “break[ing] new actors globally” and thinks that Jamwal is now “ready” for it.

Before him, “the most fun” for the director had been with Dwayne Johnson in The Scorpion King, as he could “open up people’s expectations with a new talent. Jim [Carrey] was new on The Mask and Cameron [Diaz] had never acted before. [I like] taking an action actor like Vidyut and make him stretch, [making him] more vulnerable by showing his relationship with the elephants, along with some comedy. Atul is an amazing pro and was like an anchor for my cast. Pooja’s taken it to the next level and is as brave as Vidyut when it comes to action,” he emphasises.

With box-office hits like Baby, Pink, and, more recently, Badla (which grossed nearly ₹100 crore worldwide), Taapsee Pannu has brought a new facet to the Bollywood female lead. Whether it is wielding a gun and avenging the death of a partner, or taking a privileged male to court over sexual assault, there seems to be […]

Stages of bias in Urdu poetry rendered in India and Pakistan

We are living in times when “Dadis (grandmas) of Shaheen Bagh” daily shatter all manner of glass ceilings and barriers, yet some stereotypes refuse to go away. Take the case of women poets in Urdu. While Urdu poetry itself attracts enthusiastic mixed audiences across the Hindustani speaking regions, a curious gender divide trips up women […]