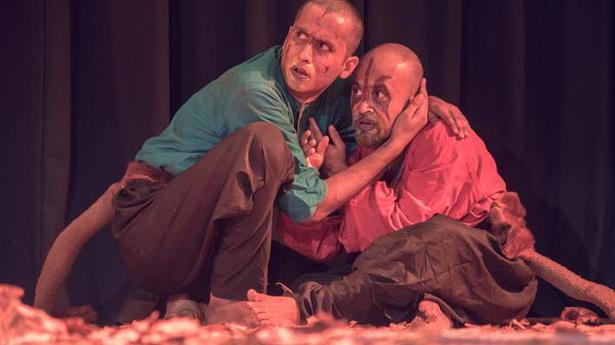 Playing at the ongoing Damu Kenkre Smriti Mahotsav tonight, is a fairly new production directed by the up-and-coming Abhinav Grover that bills itself as “an intertextuality between Waiting for Godot and Kishkindha Kand”. The former is, of course, the classic absurdist play by Samuel Beckett. The latter refers to an important locale in the Ramayana, which was the monkey king Bali’s domain, before Rama facilitated a contentious transfer of power to Sugriva, as detailed in the great epic.

Grover’s play is titled Raamji Aayenge, and is set in an indeterminate period in which Kishkindha has passed into human hands. Vladimir and Estragon, the tramps from the Beckett play, are now supplanted by anthropomorphic vanars Bhonpu (Kaustav Sinha) and Peepee (Grover). As in the original, the two protagonists are trapped in an interminable limbo, waiting for a personage always on the verge of arriving, but who likely never will.

At the outset, it must be mentioned that the play seems less an exercise in intertextuality, than a straight-up adaptation that is, in itself, adequately competent and engrossing. Grover does invoke a world of implied totalitarianism, and Bhonpu and Peepee are both disoriented by the realm of humans, one degree removed, that they can only tangentially access. Yet, the massive debt the play owes the masterwork that is its mainstay results in a piece that is unmoored from itself. It is tethered instead to the sheer power of a Beckettsian universe whose whimsy and imagination cannot find an equivalence of such power in the Indian settings Grover conjures up.

Set-pieces like one that plays out the Bali-Sugriva imbroglio seem superfluous as best. The translation works only in parts. Colloquial tongue becomes formal speech, a tad uncharacteristically, but there are many passages with words that appear to be properly masticated with the cadences of lived speech, even if the writer’s hand is very often visible, which is never the case with Beckett.

Yet, Raamji Aayenge is a feat of replication that does well with the pacing and rhythm of performance, and uses the absurdisms we are accustomed to — word-play, pauses, reiterations — to good effect, even if it cannot shake off the implication of being a mere imitation. A monologue by a character of a slave-like being (Karan Saini) who appears midway is totally laugh-out-loud audacious, translating essences rather than words with aplomb and enlivening the proceedings considerably.

As a showcase for its actors, Raamji Aayenge delivers mixed results. The underrated Sinha, the cameo artist of many plays, chips in a revelatory turn sans ostentation or showiness, with a consistency of quality that is never short on truth or intensity or humour. His gentle aura stands in some contrast to Grover’s campier performance which appears, quite counterproductively, to revel in stretching the humour of the piece thin. There is a veneer of imperiousness to Peepee in dire need of some tempering although it does also allow him traces of human frailty that perhaps, even monkeys cannot be completely impervious to. In an underwritten (or under-translated) part, Kartavya Anthwaal Sharma, as the master to the aforementioned slave-being, nonetheless does well, bringing in an inspired diversion with a supercilious upper-caste inflection. Wearing his entitlement on his sleeve, he bolsters the play’s undercurrent of oppression, as does Saini’s turn.

Grover has rich subtext and unspoken depth at his disposal that ultimately the play ends up paying only lip-service to. Bhonpu and Peepee bring a proletariat character to a piece that is not interested in their throwing off the yoke, and instead reinforces the idea that there are immutable differences between people, and such inequities might never be bridged. The fact that they are monkeys not humans gives them a peculiarity of vantage that is certainly a strong gaze, to begin with, but it’s an idea that isn’t fully developed, though not for want of trying. Looking at subjugation through the bemused eyes of those ostensibly outside the system is a powerful lens certainly — the monkeys’ ‘animal in the wild’ freedom may be preferable to being squelched underfoot in man-made enterprises, but not for long, as the play ominously signals.

An important moment is when Saini is revealed to be an wired-up android, whose mangled machine speech still speaks of existential crises and human foibles. In the second act, smartphones take over. The production plays touch-and-go with this futuristic (or contemporaneous) premise, and is ultimately an opportunity squandered in servitude to a great text.

Raamji Aayenge will be staged this evening at Mumbai Marathi Sahitya Sangh at 6 p.m.; entry is free.

‘There is only one Shahenshah’

I was born and raised in Delhi in a very cosmopolitan atmosphere. Back then, Amitabh Bachchan was a big draw, and once I started watching his films, I became a big fan. Those were the years when there was one ‘Big B’ film after another, and we, as fans, were not complaining at all. My […]