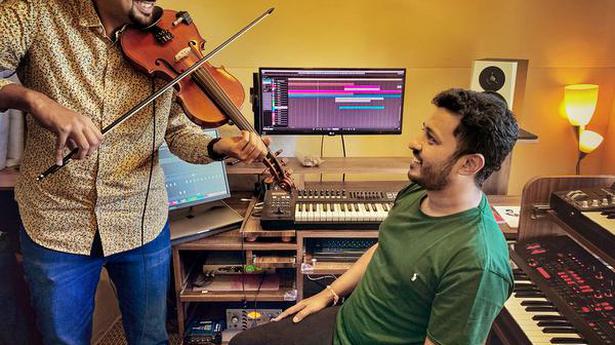 Charan Raj has created a masterful blend of genres for Hemant Rao’s Kavaludaari. Speaking of how he approaches new projects the music director says, “I study the story and script, and then decide on the genres. I also unlearn my previous works as otherwise the score could sound repetitive.” The singer and a composer’s diverse musical persona is reflected in his work in Kannada cinema.

In his compositions, Charan Raj uses old school jazz with Kannada lyrics, or the sitar, sarangi and tabla like he did for ‘Naa Ee Sanje Ge’ in Hemant Rao’s Godhi Banna Sadharana Mykattu. “Suri, the director of Tagaru, told me the basic storyline and asked me to compose songs based on emotions rather than situations. I used a blend of electronic and traditional sounds in ‘Tagaru Bantu Tagaru,’ while I created an urban soundtrack for Godhi Banna… One has to include all shades to showcase a musical character.”

While he had scored for the popular Pushpaka Vimana, Charan Raj came to the limelight when he bagged the Karnataka State Film Award for Best Music Director for his work in Jeerjimbe (2016).

Trained in Carnatic music by Perumbavur Raveendranath from Thiruvananthapuram, and Neecia Majolly in Western Classical, Charan Raj holds a certificate in piano from the London School of Music, and had been part of the vocals for Ricky Kej’s Grammy-winning album, Winds of Samsara.

Kavaludaari, by Puneeth Rajkumar’s PRK Productions is a thriller. “There is an emotional side to the film as well. So I had to create a score that was stirring and edgy. For some songs, I composed and wrote the lyrics while for others I worked with the lyricist. Hemant is open-minded and accepting of both. For Godhi Banna, we had live recordings of all the songs,” says Charan. Hemant was not in favour of lip-sync, so there was only mood music.”

Kavaludaari also reflects Charan’s love for the fiddle. One of the tracks has portions of Celtic music while another has violin flourishes from Aneesh Vidyashankar. “I have been collaborating with Aneesh for several years on many films. I am comfortable working with creative minds like his. The classical violinist also works on his unique technique to suit film recordings.”

Apart from melody, the harmony of orchestral effects from Aneesh’s huge collection of violins marks the song. “This piece, “Ide Dina” which is just released, sounds like a Quartet, as Aneesh plays from different violins, recorded from different positions.”

Charan is hesitant about picking a favourite track from Kavaludaari. “Every song has something new, and people have to listen to discover the novelty of each song.”

‘There’s no hero-giri in the show’

When asked whether their new series engages with the popular and oft-visited espionage genre, Raj Nidimoru, one half of the writer-director duo popularly known as Raj and DK, says,“We didn’t want to be derivative by making another spy show like another spy show”. Raj’s partner-in-film, Krishna D.K. asserts that there are in fact no examples […]

Child prodigy Poornima Krishna Emani plays both the flute and veena with equal ease. Hailing from a family of Hyderabad-based musicians, Veena and Chitravina exponent Emani Lalitha Krishna and Tandava Krishna (Mridangist), she started learning music (vocal and veena) from her mother. Later, she learnt to play the flute from V.Nagaraju, a renowned flute vidwan. […]