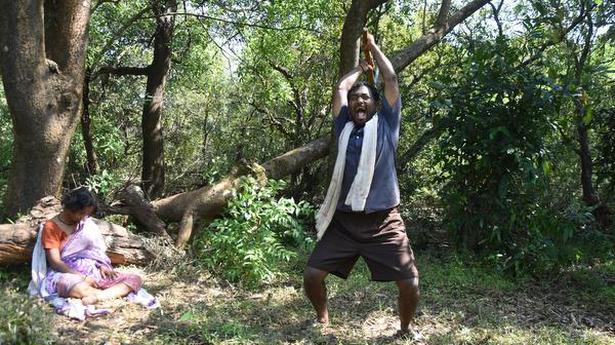 Towards the end of Kaajro (Bitter Tree) the protagonist Tilgya (Vithal Kaale) speaking to his deceased wife while burying her, says that the holy tree aapto (whose leaves are auspicious and exchanged on Dussehra) along with kaajro (considered poisonous and useless), both grow in the same forest. The point that Tilgya is making to his dead partner is that nature never discriminates; only humans do. This feeling is very much the crux of Kaajro, a Konkani film, directed by Nitin Bhaskar which was screened as paart of the recently concluded Mumbai Film Festival’s (MAMI) India Story section. “My film has a total of 60 characters, and for me [they] represent different facets of society,” emphasises Bhaskar who has worked as an assistant director with filmmakers like Shyam Benegal, Dayal Nihalani, and Ram Gabale. “I have also shown a character who does not believe in discrimination and wants to develop society.”

For Bhaskar, who hails from Maharashtra this is the second Konkani film he’s been part of (after Mahaprayan). “I can’t speak Konkani fluently but I understand 70% percent of it. Konkani is a lovely language,” says Bhaskar who has made five independent films before this, all in Marathi. His last film was the un-cut Konkani film, Mahaprayan (2017) directed by Nilesh Karamunge, in which Bhaskar was credited as a technical director.

The film makes a strong comment on caste and class discriminations that are prevalent in our society, relayed through Tilgya, who belongs to an untouchable caste. “The system of social classification always disturbed me,” says Bhaskar. “So when I heard the story of Kaajro, I felt that it was the proper [narratve] to present what I feel about the classification prevalent in the society.” Kaajro is based on a short story written by Dr. Prakash Parienkar, who heads the department of Konkani at Goa University, with a screenplay written by Bhushan Patil and Parienkar. Shot in Derodem village in Valpoi taluka in North Goa, Bhaskar’s film revolves entirely around Tilgya and his ailing wife Gokula (Jyoti Bagkar). Tragedy strikes when his wife dies on Dussehra. He is then forced by the villagers to leave with his dead wife and is also barred from playing the drum during the festival’s celebrations. The director maintains that this was difficult and sensitive topic to portray, but his aim was to remain true to the original story and make it realistic rather than sensational.

One gets a glimpse of rural Goa, in Kaajro which is hardly represented in mainstream media. “Even though there are schools and tarred roads in almost every village of Goa, such rituals still exist here. Like, I have shown the ritual of sutak (12-day mourning period, where relatives of the deceased are not allowed to take part in any religious function),” says Bhaskar while sharing that his research was aimed at highlighting nuances of a complex subject. He adds that sometimes these rituals are customised according to the self-interest of the few. The film also makes it a point to touch on the deprivation and mistreatment of the disenfranchised, in different societies and not only in rural areas. “One cannot deny or discriminate people based on caste or class as they are part of our life and society at large. Why can’t we accept them?” questions Bhaskar. Actor-producer Rajesh Pednekar who has produced this film under the banner ‘de Goan Studio’, echoes his director when he stresses, “In just two hours [Kaajro shows viewers] the [problems faced by] the deprived section of society.”

Rishi Kapoor and the inheritance of romance

From winning the hearts of dance lovers with her rhythmic movements and expressive eyes to getting accolades for acting in Doordarshan serials, Neelima Azeem left an imprint on those who grew up in the late ‘80s and early ‘90s. Next year, she will be completing 50 years as a dancer and Neelima would pay homage […]