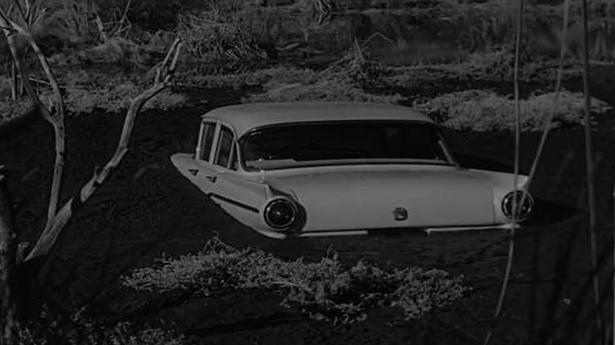 This is an embarrassingly obvious thing to say, but some very exciting scenes — in thrillers or action films — have involved speeding vehicles. Just off the top of my head, there’s the brilliant night-time sequence in Hitchcock’s North by Northwest (1959) where a heavily drunk Cary Grant struggles to control his car after escaping his would-be assassins. Or Steven Spielberg’s debut feature Duel (1971), set largely on a highway where a businessman is pursued by a menacing truck. And never forget the 1980s Hindi film trope of the “brake fail” (brought about by sabotage or random bad luck).

Many nerve-racking scenes have also been built around a car that isn’t mobile or functional. Sujoy Ghosh’s recent thriller Badla (and the Spanish film it is an official remake of, The Invisible Guest) offers us, in the space of a few minutes, both a car crash and a car that refuses to start. The latter is essential to the narrative — it creates a complicated tangle for the protagonists, who would have preferred to flee the accident scene. Precisely because the car doesn’t move, the plot shifts into fifth gear.

But there is another moment, from a 75-year-old film, where the temporarily stalling of a vehicle has a different effect. Midway through Billy Wilder’s 1944 noir classic Double Indemnity comes a scene that is both incredibly tense and a very funny fourth wall breaker.

Phyllis (Barbara Stanwyck) and Walter (Fred MacMurray) are executing a meticulously thought-out plan to get rid of the former’s husband, so they can collect on a large insurance policy. This involves Walter posing as the physically disabled husband, complete with crutches, to create the impression that the victim (who has been killed beforehand… in a car!) accidentally fell off a moving train. Everything runs with clockwork precision, as it has to: after hopping off the train, Walter meets Phyllis and they leave the body in a specific spot on the rail tracks.

But as they are set to leave, having ensured that nothing can tie them to the death, it looks like their car (parked a short distance away) won’t cooperate. The ignition is turned, once, twice, but all we hear is the engine groaning dully. The killers are so tense they barely even exchange glances, their faces are sweat-soaked. And then the car stops fooling around and roars to life.

The scene lasts just 20 to 30 seconds, and has no further relevance to the narrative, but it is delicious, because we realise how thoroughly their goose would have been cooked if the car had broken down. Nothing would help — not leaving it where it was nor finding someone to fix it. It’s as if this plot-driven genre film has briefly paused to look us in the eye and say: “What if THIS happened at this stage in this nearly perfect plan?”

It’s worth noting that Wilder’s film has already winked slyly at the viewer before this: in its unusual (for the period) opening image, we see the Paramount logo giving way to a silhouette of a man hobbling on crutches as the credits play — and long before we know anything about the characters.

The car scene is also a classic example of audience manipulation. If you’re a first-time viewer and invested in the story, you have almost certainly suspended your moral faculties at this point: you’re holding your breath, along with the “bad guys”, hoping the engine will rev up. It’s similar to the effect of the famous scene in Psycho where Norman Bates rolls the car carrying a dead body into a swamp behind his motel. When the vehicle stops sinking for a few seconds, we feel tense along with Bates.

That moment is often discussed as an instance of Hitchcock’s talent for making his viewers complicit with a criminal, through the gradual building of empathy. But less discussed is another reason why we want the car to sink fully: if it didn’t, the film would effectively be over, too soon. We would be deprived of the more subtle pleasures of watching how the investigation plays out. How anti-climactic and ludicrous it would be if the very next scene had the police searching the area around the motel and finding half a car sticking out awkwardly from a muddy swamp!

This is equally true of the Double Indemnity scene, but I also see it as an intersection between high drama and farce: a detached, absurdist moment which reminds us that the best-laid plans, combined with hard work, can amount to nothing if one tiny, mundane, unforeseeable thing goes off. We are engrossed in the narrative, but also at a remove from it, allowed to see how precarious the whole project is — a human story at the mercy of a mechanical glitch.

The Delhi-based writer and film critic says he finds it easier to focus on specific scenes as he grows older.

They were India’s golden couple of the 1920s and 1930s, two beautiful people who cut a wildly glamorous dash across the globe, being photographed by Man Ray and sipping cocktails with Hollywood stars. The extraordinary lives and impeccable taste of the yesteryear Maharajah and Maharani of Indore — Yeshwant Rao Holkar II and Sanyogita — […]

In November last year, in its content showcase “See What’s Next: Asia” summit in Singapore, Netflix had announced eight new original films for the India market. Among them was Hotel Mumbai, a fictionalised account of the 2008 terrorist attacks on India’s financial capital, specifically the siege of Taj Mahal Palace and Tower Hotels. Netflix had […]

Hollywood star John Krasinski wants to spread some good news by bringing positive stories as the world battles coronavirus pandemic. The actor-director launched ‘Some Good News’ on YouTube, featuring his former “The Office” co-star Steve Carell. Krasinki, whose sequel to “A Quiet Place” has been postponed due to the virus spread, said he wanted to […]