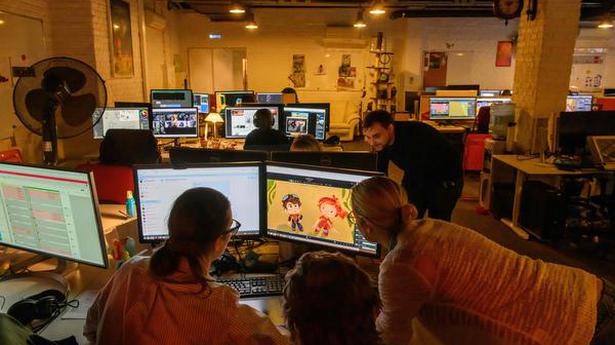 With its Netflix contracts, state-owned Parovoz — which means ‘locomotive’ in Russian — is at the forefront of a resurgence of the country’s animation industry.

But, for some observers, the revival comes at the expense of a tradition for innovation dating back to the Soviet-era heyday. Russian authorities have invested heavily in the animation sector in recent years, after it, like others, was left in ruins following the breakup of the Soviet Union in 1991.

Parovoz is part of a state media holding and has grown from around 20 to 300 employees. Its animated series are shown in 55 countries.

Chief executive Anton Smetankin, who co-launched the studio in 2014, said it had “a product for every market”.

Last year, two Parovoz productions were bought by the U.S.-based streaming service Netflix — one of them, Leo and Tig, is about the adventures of a tiger and leopard in Siberia.

“We have taken the best from the Russian school [of animation],” said artistic director Yevgeny Golovin. “All of our films are full of kindness and can be watched by children of all ages.”

The studio also signed two contracts with China and had several of its projects dubbed and adapted for the Chinese market.

Today they are shown on four of China’s top streaming channels whose total users are estimated to number 1.5 billion a month.

Soviet animators won global repute for their creativity but the sector has seen mixed fortunes since then.

Soyuzmultfilm, a studio launched in the 1930s which made many of the Soviet Union’s animated greats, faced funding problems in the 1990s and lost control of its back catalogue.

In 2011, then prime minister Vladimir Putin stepped in to try to restore the Russian animation industry to its former glory.

By the early 2000s, Soyuzmultfilm had been reorganised and was again a state company.

The government returned the distribution rights for its classics back to the studio and invested about $14 million over five years.

But it is a cartoon series produced by a private Russian studio, Animaccord, that has proven a big international commercial hit.

Since 2009, Masha and the Bear about a mischievous little girl and an amicable, retired circus bear has been viewed dozens of billions of times on YouTube alone, as well as been broadcast in 100 countries, and has inspired several spin-offs.

“Our theme, which revolves around the relationship of a child and an adult, is universal,” Animaccord CEO Vladimir Gorbulya said. “There is a good amount of humour and things to reflect upon.”

Encouraged by the global success of the computer-animated duo, the Russian government has continued to boost support for the industry, announcing massive subsidies and, in 2017, tax reductions.

“There is a desire to make sure our children look at animated films with our national cultural codes, our mentality, our language and culture,” said Irina Mastusova, who heads the Russian animation association.

She noted that the Russian animation sector was still relatively up-and-coming, with around 3,000 employees.

Larisa Malyukova, a culture reporter for the independent Novaya Gazeta newspaper, said that government support prioritised commercial success, rather than innovative and poetic projects of the kind that made Soviet animators famous. “The Culture Ministry pays less and less attention to original animation,” she said.

“This worries artists, since this is what, at least in Russia, is a laboratory that creates new talent.”

Invoking the spirit of Baba Nagarjun

One of the most prominent people’s poets hailing from the Hindi heartland, who wrote prolifically in both Hindi and Maithili, was Vaidyanath Mishra who went by the pen name Baba Nagarjun. A freedom-fighter and stalwart of many mass-awakening movements, he was notably incarcerated during two tumultuous phases of Indian history — in 1939, by the […]

Netflix Inc is testing a ₹250 monthly subscription for mobile devices in India, the video streaming giant said, aiming to boost its presence in a price-sensitive market where data consumption on smartphones is surging. California-based Netflix currently offers three monthly plans in India, ranging from ₹500 to 800, but those are still expensive compared with […]

The musician, who is currently scoring for the Sivakarthikeyan-produced film ‘Vaazhl’ and Atlee’s production venture ‘Andhagaaram’, shares his experience filming the documentary ‘Arunagiri Perumale’, whose subject is the mystical 15th-Century Tamil saint poet Arunagirinathar Source Related