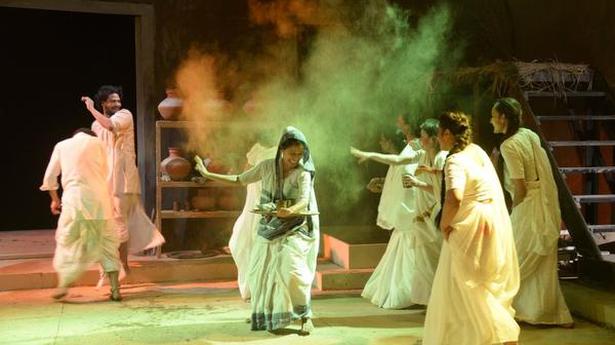 The terahvin or the 13th day marks the final day of mourning after the passing away of an individual, according to Hindu custom. Yet, for the kin of farmers who have committed suicide due to mounting debts, it is hardly a day of closure. Their widows are pushed into livelihoods they are wholly unprepared for. This irony forms the unsettling backdrop of a new Marathi play from theatre activist Harish Ethape, titled Terav, written by Shyam Pethkar. What gives the play its raw and visceral power is that it is performed by five real-life farm widows and their children.

The play opened in November last year at Chandrapur, and as recently as last week, it was staged at the National Vasant Natyotsav organised by the Academy of Theatre Arts at Mumbai University. Ethape’s theatre group, the aptly named Agro Theatre, is based out of Wardha, and they had begun work with an initial focus group of 20 widows from Wardha, Yavatmal and Amravati — teaching them the fundamentals of live performance and storytelling. With Ethape’s regular actors standing in as chorus, the women confidently recount testimonial narratives from their own lives. Audiences have hailed them for their courage and candour. Their stories are expectedly marked with bitter struggle and sacrifices, but there is an underlying resilience that bestows Terav an aura of unmistakable social uplift.

Vaishali Yede, one of Terav’s performers, and already a symbol of stoic resistance, found herself in the thick of a political heave-ho when Nayantara Sahgal’s invitation to the Akhil Bharatiya Marathi Sahitya Sammelan was unceremoniously revoked last month. After several other literary personages declined invites, the organisers zeroed in on Yede to inaugurate the festival, a bitter-sweet honour given the circumstances.

Placing real people on stage to ‘speak their truth’ is always a tricky proposition, and can veer into unintended navel-gazing, but Ethape is a conscientious theatre director who deals in pragmatism rather than sentimentality. Another recent play in which the confessional elements fall together spectacularly is Dhwani Vij’s Bhagi Hui Ladkiyan, in which young women from Delhi’s sprawling Nizamuddin Basti recount quotidian details from their lives with disarming vim, arousing empathy rather than pity. A note of levity cloaks but doesn’t obscure the darker realities that confront the women.

In contrast to Terav, the widows in Swati Dubey’s impressive production Agarbatti, are fictional figures who represent the widows of the upper-caste men killed in the Behmai massacre. Indeed, the play opens with a scene from Shekhar Kapur’s Bandit Queen (1996), in which a vengeful Phoolan Devi (an iconic performance by Seema Biswas) lines up the men who had gang-raped her and executes them almost at point-blank range. The state government made the tokenist gesture of bestowing the now destitute women with a beedi karkhana. In Dubey’s play, the site of an uncertain sustenance becomes an agarbatti factory, which the play’s title alludes to.

First showcased as Dubey’s diploma presentation at the National School of Drama in 2017, the play has been mounted by Jabalpur’s Samagam Rangmandal. Playwright Ashish Pathak’s excellent script has a nuanced and considered approach that never swerves into melodrama or cliché, and gives almost every woman in a spirited ensemble a fleshed-out turn, and several dramatic high points to sink their teeth into. This ranges from Rukmini Sircar’s gravitas-laden performance as Lala Ram Thakurain, who cannot accept her infirm husband’s role in the carnage, to Monika Panwar’s Damyanti, a young woman widowed very soon into her marriage. Panwar is the play’s conscience-keeper, and the spectre of marital rape that looms large over the collective allows them to ultimately empathise with Phoolan Devi’s motivations. The catharsis is not forthcoming till the women confront what their men might have done.

Agarbatti’s staging at the recent Mahindra Excellence in Theatre Awards, was marred with technical miscarriages of sound and light, and a general disjointedness of presentation, but ultimately the strength of the material and the performances shone through.

Of smelly ingredients and a right to cook

In the opening scene of Axone, the first Hindi film on the life of northeasterners outside the northeast (of India), we follow three young friends hurrying through their neighbourhood at the crack of dawn. In a furtive mission that resembles a spy flick, the trio reaches a dingy room tucked away in the lanes of […]

‘I want to keep learning’

A little more than nine years ago Sonakshi Sinha stepped on to a film set in Wai, Maharashtra, to shoot for Dabbang her debut film. The actor had had no acting aspirations until her first co-star Salman Khan encouraged her to join the family business (Sinha’s parents Poonam and Shatrughan are both actors). It was […]

Back on-screen after a hiatus, Sushmita Sen discusses ambition, mental health, and shooting in one take Source Related