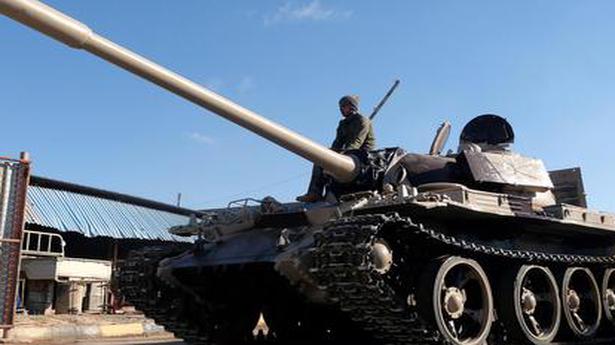 Fighting near Tripoli has killed 121 people since Field Marshal Khalifa Haftar launched an offensive earlier this month to take the Libyan capital, the World Health Organization (WHO) said on Sunday.

In clashes between Field Marshal Haftar’s forces and those of the UN-backed Government of National Accord (GNA), both sides have proclaimed “advances” but neither appears to have taken a substantial lead on the ground in recent days.

With more than 560 people wounded since the fighting started on April 4, WHO said it was sending more medical supplies and staff to Tripoli.

The mounting violence has sparked global alarm about the oil-rich country that has been in turmoil since NATO-backed forces overthrew former dictator Muammar Qadhafi in 2011.

In the chaos since, a bewildering array of militias have been seeking to take control, and fighting has flared again shortly before a conference had been scheduled to discuss Libya’s future, an event since cancelled.

Field Marshal Haftar, who leads the self-styled Libyan National Army (LNA), has pushed from his power base in the country’s east toward the Libyan capital in the west, the seat of the UN-backed unity government led by Fayez al-Sarraj.

On Sunday, he met with Egyptian President Abdel Fattah al-Sisi in Cairo, where the duo were “discussing the latest developments in Libya” according to state media.

With gunfire now echoing through city blocks and tanks rumbling through towns and districts south of Tripoli, many panicked residents have fled their homes.

More than 13,500 people had been displaced and over 900 are now living in shelters, said OCHA.

The United States has officially shuttered its consulate in Jerusalem, downgrading the status of its main diplomatic mission to the Palestinians by folding it into the U.S. Embassy to Israel. For decades, the consulate functioned as a de facto embassy to the Palestinians. Now, that outreach will be handled by a Palestinian affairs unit, under […]

Australia calls for probe into response

Australia on Sunday called for an independent investigation into the global response to the COVID-19 pandemic, including the World Health Organization’s handling of the crisis. Foreign Minister Marise Payne said the country would “insist” on a review that would probe, in part, China’s early response to the outbreak in Wuhan, the city where COVID-19 emerged […]

Iranian authorities briefly detained Britain’s ambassador in Tehran on Saturday, according to Foreign Secretary Dominic Raab, after he was reportedly arrested during protests against the regime. “The arrest of our ambassador in Tehran without grounds or explanation is a flagrant violation of international law,” Mr. Raab said in a statement after the detention of Rob […]