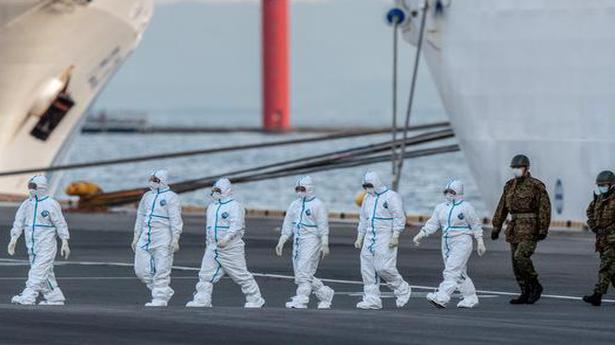 Passenger tests aboard the Diamond Princess cruise ship in Japan confirmed at least 65 more cases of coronavirus on Monday, according to the vessel’s captain, as some passengers took to social media to warn against depression over their confinement.

The figure, announced to passengers after a statement by the cruise operator put the new infections at 66, takes the tally on board to 135, showing a rapid rise in the outbreak on the ship docked in the port of Yokohama.

Among the new cases are 45 Japanese and 11 Americans, the ship’s operator, Princess Cruises, said in the earlier statement.

“This is not news that anyone of us wanted to receive,” the captain told passengers in a broadcast over speakers in their cabins.

“However, we have been also advised since we are in the early quarantine period of 14 days, it was not unexpected.”

The captain’s remarks formed part of an audio recording about the 66 new cases posted on Twitter by Yardley Wong, a passenger documenting the experience on the ship, using the hashtag #anxiety.

In a subsequent announcement, however, the captain told passengers he had been advised to correct the figure of new infections to 65 from 66, according to audio recordings posted by passengers.

Japan’s health ministry confirmed the 65 cases in a statement. Reuters could not immediately contact the cruise operator to seek comment on the change.

The Diamond Princess was placed in quarantine for two weeks upon arriving in Yokohama, south of Tokyo, on Feb. 3, after a man who disembarked in Hong Kong was diagnosed with the virus.

About 3,700 people are aboard the ship, which usually has a crew of 1,100 and a passenger capacity of 2,670. Passengers have been allowed on decks in shifts to get fresh air and encouraged to regularly take their temperature.

“Lots of the passengers now are getting a bit of cabin fever,” British passenger David Able said in a video posted on Facebook. “Depression is starting to set in.”

Another said he hoped assurances about the effectiveness of quarantine and ventilation on board would prove true.

“I will get nervous if we pass 200,” said the 43-year-old Hong Kong resident quarantined on the boat with his wife, child and several of his family.

“Hoping best for those taken to hospital. At least two report back to us on Facebook that they are symptom free,” added the man, who declined to be identified.

People who have been in close contact with newly confirmed cases on the ship face a longer quarantine than the originally planned period until Feb. 19, the World Health Organization said late on Sunday, without saying how many there were.

Japan’s health ministry is recording infection counts on the ship and evacuee flights from China separately from the official tally. Domestic cases stand at 21.

The disease has killed 908 people, chiefly in mainland China, and infected more than 40,000.

The U.K.-flagged Diamond Princess is managed by Princess Cruise Lines, one of the worlds largest cruise lines and a unit of Carnival Corp.

Pakistan’s Punjab government on Tuesday decided not to extend the bail granted on medical grounds to former Prime Minister Nawaz Sharif, who is currently in London for treatment, according to media reports. Punjab Law Minister Raja Basharat said the Punjab Cabinet decided that there was “no legal, moral or medical basis without any concrete proof” […]

The Maldives on Saturday held its first parliamentary election since former strongman leader Abdulla Yameen was forced to stand down, with his arch-rival expected to make a big comeback in the vote. Mohamed Nasheed, another former president, is the highest profile candidate up for election for the 87-member People’s Majlis, or parliament. He returned from […]

Lebanon security forces face off against protesters near parliament building

Security forces in Beirut fired tear gas and used water cannons on Saturday in clashes with protesters armed with tree branches and sign posts near Lebanon’s parliament. After a lull in largely peaceful protests which broke out across the country in October over the state of the economy, people filled the streets again this week. […]