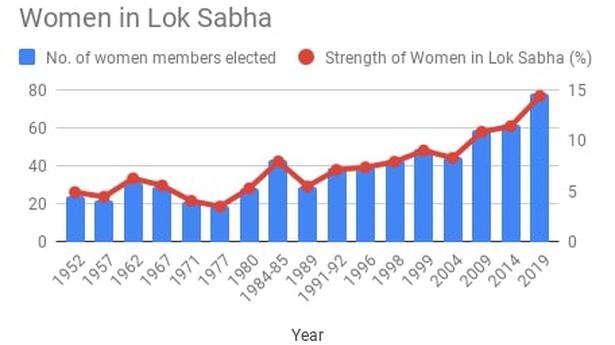 Despite the share of women legislators in the Lok Sabha peaking at 14.39% as of June 2019, India is still worse than 140 countries in the representation of women in Parliament. The global average for the share of women parliamentarians stood at 24.6%.

Global snapshot
The graph plots the number of seats in Parliament against the share of women legislators in 191 countries. Each circle is a country.

Use the dropdown menu to select a country of your choice.

Rwanda has the highest proportion of women in Parliament (over 60%). India ranks 141st out of 191 nations.

Slight uptick
The graph shows the share of women lawmakers in the Lok Sabha from the first election to the latest. The percentage of women parliamentarians has gone up significantly in the last three terms of the Lower House.

State of play
The graph shows the average share of women MLAs in State legislatures between 2008 and 2018. Each bar is a State. Only nine States had an average share of more than 10% women in their Assemblies in this period.

As can be seen, Rajasthan had the highest average; Tamil Nadu was middling and Mizoram had the least.

U.S. health officials on Thursday reported 18 deaths due to a mysterious lung illness linked to e-cigarettes and other vaping products and said the number of confirmed and probable cases of the condition now exceeds 1,000. Public health officials are still at a loss to explain the cause of the severe lung illnesses, which have […]

Every member has a right to speak: Speaker

The Assembly on Tuesday witnessed a verbal duel between Speaker Thammineni Seetharam and Leader of the Opposition N. Chandrababu Naidu during question hour following the latter’s remark that the House appears to have become a party office. TDP objection Mr. Seetharam allowed Gannavaram MLA Vallabhaneni Vamsimohan to speak as soon as the House assembled. The […]