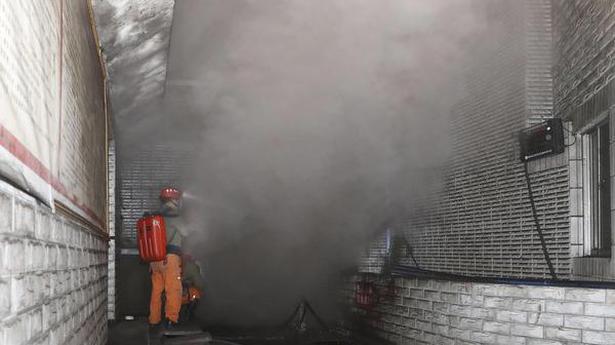 Rescuers, including police officers and firefighters, are trying to reach the trapped miners. The cause of the accident is under further investigation: report

Eighteen of 23 workers were killed in a coal mine in China due to an excessive level of carbon monoxide, local officials said on Saturday.

The accident happened at around 5 p.m. on Friday at the Diaoshuidong coal mine in the district of Yongchuan in Chongqing Municipality, state-run Xinhua news agency reported.

Eighteen miners were confirmed dead due to excessive level of carbon monoxide, it said.

Rescuers, including police officers and firefighters, are trying to reach the trapped miners. The cause of the accident is under further investigation, the report said.

The Diaoshuidong coal mine, which was established in 1975 and became privately-owned in 1998, has an annual production capacity of 1,20,000 tonnes of coal, according to the local emergency management department.

Hydrogen sulfide poisoning in the mine left three dead and two injured in March 2013, the Xinhua report said.

The fall of Baghouz brings to a close a nearly five-year global campaign against the Islamic State that raged in two countries, spanned two U.S. presidencies and saw a U.S.-led coalition unleash more than 1,00,000 strikes. The campaign has left a trail of destruction in cities in Iraq and Syria, likely killed tens of thousands […]

Battles raged between Armenian and Azerbaijani forces over the disputed Nagorno-Karabakh region on Tuesday, with both sides vowing to pursue the confl Source: thehindu.com Related

South Korea on Friday reported that 91 patients thought cleared of the new coronavirus (COVID-19) had tested positive again. Jeong Eun-kyeong, director of the Korea Centers for Disease Control and Prevention, said the virus may have been “reactivated” rather than the patients being re-infected. Health officials said it remains unclear what is behind the trend, […]