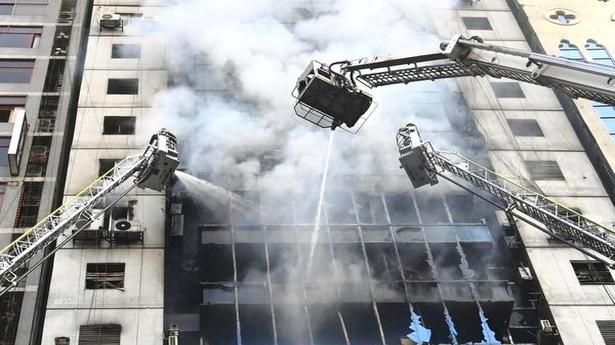 Desperate workers leaped to their deaths as a huge fire tore through a Dhaka office block on Thursday, killing at least 19 people and trapping others in the latest major inferno to hit the Bangladesh capital.

Rescue workers warned the death toll could rise sharply as firefighters recovered charred bodies from the complex where an unknown number of office workers were engulfed by intense smoke and flames.

At least six people died after jumping from the 22-floor building, officials said.

Dhaka police chief Asaduzzaman Mia told reporters at least 73 people were injured and being treated in hospitals across Dhaka.

People were seen screaming for help as hundreds of panicked onlookers crowded the streets of the upmarket Banani commercial district.

Some workers slid down a television cable on the side of the building. Others grabbed ropes lowered by emergency service helicopters which pulled them out of the blaze.

The inferno erupted barely a month after at least 70 people were killed in Dhaka apartment buildings where illegally stored chemicals exploded.

The latest disaster brought new scenes of horror amid fears that the toll would rise.

More than 100 ambulances were parked in streets around the building.

Shoikot Rahman heard colleagues raise the alarm and ran to safety before smoke and flames engulfed the building.

“When I heard a fire broke out in the building, I quickly rushed out,” he said. “Many of my colleagues are still trapped in the office.”

Billionaire entrepreneur Elon Musk has unveiled the latest iteration of his space company’s newly assembled Starship, outlining a speedy development timeline for the centerpiece vehicle of SpaceXs quest to launch humans to the moon and Mars. Mr. Musk showed a crowd of space enthusiasts and reporters at SpaceX’s rocket development site late on Saturday in […]

A convicted Islamist terrorist, who spent part of his teens in Pakistan and was released last year from a UK prison, is suspected to be the man who stabbed two people to death in a terror attack on London Bridge, police said on Saturday. Police have identified the suspect as 28-year-old Usman Khan who, inspired […]

A senior Pakistani judge on Sunday denied being blackmailed into convicting ex-Prime Minister Nawaz Sharif for graft last year after the main opposition party showed a secretly taped video that appeared to show him saying he was threatened over the case. Nawaz Sharif’s Pakistan Muslim League-Nawaz (PML-N) party presented the video at a specially called […]