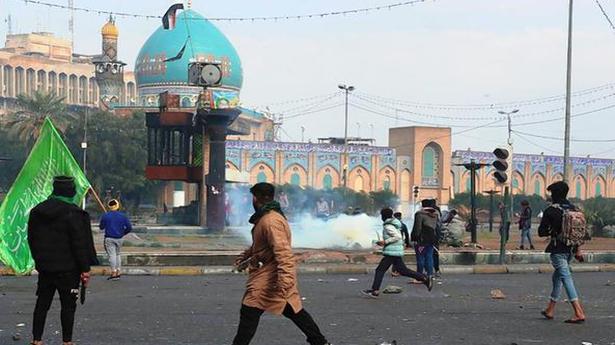 Iraqi security forces cleared anti-government protesters from streets and squares in Baghdad and the south on Saturday, stoking fears among demonstrators that their long-running reform campaign may be suppressed.

It came a day after populist cleric Moqtada Sadr announced that he would no longer back the youth-dominated movement, after he held his own mass rally that saw thousands pack the capital’s streets to demand U.S. troops leave Iraq.

The city’s military command announced it had retaken control of Ahrar Bridge, a flashpoint for clashes between security forces and demonstrators for months.

It also pushed protesters out of Tayaran Square and Mohammad Qasim highway, where new sit-ins this week were intended to pressure authorities into enacting long-awaited reforms.

By early Saturday afternoon, there were hit-and-run clashes in central Baghdad but security forces had not yet entered the main protests camp in Tahrir Square.

Young men had deployed around the square carrying black shields made out of metal drums, on which they had painted the words “Tahrir Shield Squad.”

An AFP photographer saw protesters in the camp dismantling wooden stalls and colourful tents they had set up months ago.Mr. Sadr, a militiaman-turned-politician, is notorious for switching political positions with dizzying speed. He backed the protests when they erupted in October and called on the government to resign — even though he controls Parliament’s largest bloc and other top posts. But last week, he called for a separate rally to demand 5,200 U.S. troops leave Iraq, after a U.S. strike on Baghdad killed top Iraqi and Iranian commanders earlier this month.

Thousands streamed into Baghdad for Friday’s rally and while Mr. Sadr did not attend, he hailed the turnout and said he would no longer be involved in the anti-government campaign.

The about-face prompted reports of protest camps being dismantled across the country. In Hilla, Diwaniyah, Kut, Amarah and the Shia shrine city of Najaf, tents were stripped down to their metal frames on Saturday.

Indonesia’s Chief Security Minister Wiranto is conscious and in a stable condition after he was stabbed on Thursday by a man authorities suspect had been radicalised by Islamic State ideology, police said. Television footage showed the minister slump to the ground beside his car after the attack in Pandeglang, in Banten province, west of the […]

US to impose visa restrictions for pregnant women

The Trump administration is coming out on Thursday with new visa restrictions aimed at restricting “birth tourism,” in which women travel to the US to give birth so their children can have a coveted US passport. Visa applicants deemed by consular officers to be coming to the US primarily to give birth will now be […]