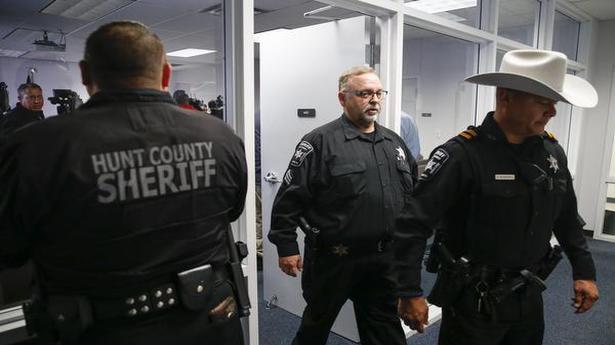 A gunman opened fire at an off-campus college party in Texas, leaving two people dead and 12 others injured before he escaped in the ensuing chaos, authorities said Sunday.

Authorities believe the shooter may have been targeting just one person at the party of about 750 people outside Greenville, 15 miles (24 km) southwest of a satellite campus of the Texas A&M University System, and that others may have been shot at random, Hunt County Sheriff Randy Meeks said. Authorities were still looking for the suspect, Meeks said, and had not yet identified him.

The shooting took place around midnight Saturday at what Mr. Meeks described as a Halloween and homecoming party for Texas A&M University-Commerce, though officials have said it was not a school-sanctioned event. Authorities believe there was one male shooter who entered the venue through the back door and began firing with a handgun, Mr. Meeks said.

Mr. Meeks described “complete chaos” after the shots rang out, with hundreds of people fleeing, including the gunman. Authorities initially had said 14 people were injured, but they later revised that figure.

The 12 injured included six people who were trampled or hurt by glass in the melee, according to Sgt. Jeff Haines, a spokesman for the sheriff’s department. Six others were injured by gunfire. Four of them were in critical condition and one was in good condition Sunday afternoon, he said. He did not know the condition of the sixth person.

The two people killed were both males, Mr. Meeks said. Family members identified one of the victims to local media as Kevin Berry Jr., 23, of Dallas.

After a vigil for Berry on Sunday night at a Dallas park, at least one person opened fire. Mourners and reporters on hand for the event took cover and at least one vehicle was struck by bullets, according to local media reports. Multiple gunshots can be heard in a video posted by one reporter.

Dallas police said the shooting stemmed from a “disturbance” at the vigil and that no injuries were reported.

University President and CEO Mark Rudin, in a statement on the school’s Facebook page, said four of its students were treated and released from area hospitals. The students were not identified.

Mr. Rudin said there is “a tremendous amount of misinformation” about the shooting and that counseling services are available to all our students at the university’s counseling center.

Authorities do not believe the gunman was wearing a mask or costume, Hunt County Sheriff’s Office Chief Deputy Buddy Oxford. He added that the shooter was dressed in a blue hoodie.

Authorities have not found the gun that was used, Oxford said.

Word of the violence spread online overnight, with many sharing on social media graphic video purported to show seriously wounded victims lying on the ground as crying and screaming could be heard in the background.

“I just briefly saw one that was a very graphic video,” Mr. Meeks said. “I don’t know that’s going to help anything at all.”

Mr. Meeks said the party was held at a facility called The Party Venue and that the owner was cooperating with authorities. The venue sits along a highway in a rural area some 2.5 miles (4 km) from the Greenville city limits. Mr. Meeks said he was not aware of any surveillance video in the area.

Outside the venue on Sunday, a few Halloween masks and other debris were strewn about. Pools of blood could be seen on the ground.

Kimberly Wilson (46), was waiting for a tow truck to get her daughter’s car out of a muddy field nearby. She said her 19-year-old daughter had traveled to the party from Dallas. She said her daughter ran when she heard gunshots and that she called a sibling to come pick her up.

“She’s angry, hurt, upset. She’s going through that whole emotional thing,” said Ms. Wilson, who is retired from the Army and served in Afghanistan. “When you’ve not been trained to deal with something like that it just throws you off.”

A patrol sergeant and deputy were at the venue when the shooting happened, having been called there for complaints about illegal parking, Mr. Meeks said. An off-duty Farmersville police officer was also there, working as security for the party.

Authorities were questioning someone who appeared to be intoxicated when they heard gunshots from the back of the building, Mr. Meeks said.

Mr. Meeks praised the patrol sergeant and deputy, saying the sergeant quickly determined that one of gunshot victims had life-threatening injuries and transported that person to a hospital, while the deputy triaged others until paramedics arrived.

Texas A&M University-Commerce was founded in 1889 and was known by several names, including East Texas State University, before joining the Texas A&M system in 1996. The university has around 6,000 undergraduate students and 4,000 graduate students.

Reigniting a debate over who has the power to declare war, the Democratic-controlled House on Thursday approved a resolution asserting that President Donald Trump must seek approval from Congress before engaging in further military action against Iran. The war powers resolution is not binding on the president and would not require his signature. But House […]

New Zealand recovery teams returned to the volcanic White Island on Sunday but were unable to locate two remaining bodies in their search, as the death toll from Monday’s eruption rose to 16, police said. Authorities said eight police search and rescue staff were deployed for 75 minutes to an area in which their information […]

Israeli President Reuven Rivlin began two days of crucial talks on Sunday with party leaders before selecting his candidate for Prime Minister, after a deadlocked repeat election was set to make forming any new government a daunting task. Israel’s largely ceremonial president is tasked with picking the politician with the best chance of forming a […]