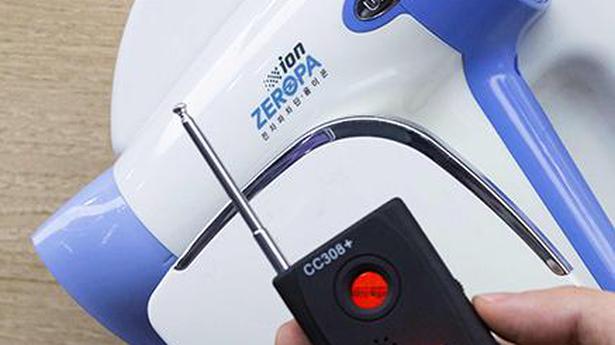 South Korean police have arrested two men for using illegal spy cameras at motels to film and livestream videos of about 1,600 guests, raking in about seven million won ($6,200) over the past three months, police said on Wednesday.

Illicit filming has surged in South Korea. Its pop music industry is reeling from a scandal over a celebrity’s sharing of videos he took secretly while having sex.

Police said the two men they had arrested, and two other people, had posed as motel guests to secretly install the cameras, obtained online from overseas, in 42 rooms at 30 establishments around the country since August.

More than 6,600 cases of illicit filming were reported to police last year, or about a fifth of all sexual abuse cases investigated, up from 3.6% in 2008, prosecutors have said. Last year, tens of thousands of women took to the streets of Seoul, the capital, to protest against illicit videos and other forms of sexual abuse and violence.

The law was amended last November to toughen penalties not only for illegal filming but also distributing images without consent, which could bring jail terms of up to five years or fines of up to 30 million won.

On Thursday, K-pop singer and television celebrity, Jung Joon-young, was arrested over accusations he shared his secret sex videos.. In a statement, he admitted all of the charges against him.

The final results from Israel’s election have confirmed that Prime Minister Benjamin Netanyahu has again fallen short of a parliamentary majority with his hard-line allies. The results, released late Thursday, signal further political deadlock. Monday’s election was the country’s third in less than a year. Previous elections in April and September also ended in deadlock. […]

Indian-origin U.S. Senator Kamala Harris of California announced on December 3 the end of her 2020 presidential campaign after failing to garner support in key states despite an early rise in the polls, according to a campaign source. “I’ve taken stock and looked at this from every angle, and over the last few days have […]

UK Prime Minister Boris Johnson, who was battling the novel coronavirus and was even shifted to the intensive care unit (ICU) during treatment, has been discharged from the hospital. Johnson, 55, was admitted to St Thomas’ hospital, in London, on last Sunday – 10 days after testing positive for the virus. A Downing Street spokesperson […]