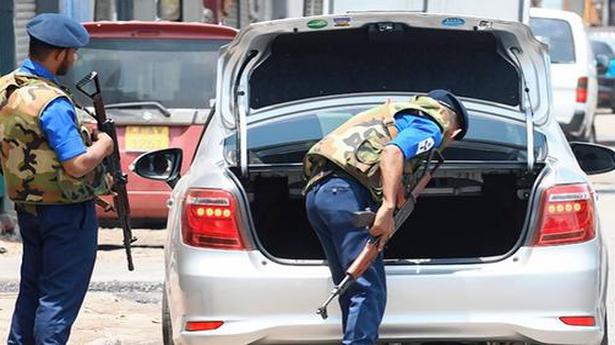 Security forces have arrested two students during a search operation at the University of Jaffna on Friday.

They were arrested under prevailing Emergency regulations that came into effect following the Easter attacks and select sections of the Prevention of Terrorism Act (PTA), after a photograph of LTTE leader Velupillai Prabhakaran was found in the students’ union office.

Friday’s search was conducted reportedly at the University’s request, ahead of its scheduled reopening date, a fortnight after institutions were closed in the wake of the Easter Sunday serial blasts that claimed over 250 lives. A few banners bearing images of the final phase of the civil war were also retrieved on the campus, according to university sources.

A canteen staff member of the University was also arrested after photographs of LTTE figures Thileepan and Anton Balasingham were spotted at the canteen. “They were produced at the Jaffna magistrate court and remanded until May 16,” said Kesavan Sajanthan, the lawyer appearing for the students. In a circular dated April 30, the University Grants Commission asked all national universities to cooperate with authorities to enable enhanced security checks on campuses. During the last week, search operations were held in other universities, including the South Eastern University. Further, security forces are likely to conduct extensive search operations at schools before they reopen on Monday, official sources said.

Two weeks after deadly suicide bomb attacks targeting churches and hotels in Colombo, nearby Negombo and the eastern Batticaloa city, Sri Lanka remains on high alert. Most suspects linked to the incidents have been apprehended, according to sources, but amid rumours of continuing threats, educational institutions and business establishments remain apprehensive.

Egyptians voted on Saturday in a three-day referendum on constitutional changes that could allow President Abdel Fattah al-Sisi to stay in office until 2030 and boost the role of the powerful military. Mr. Sisi’s supporters say the changes are necessary to give him more time to complete major development projects and economic reforms. Critics say […]

China’s central bank said on Saturday that the country’s lenders will tolerate higher levels of bad loans, part of efforts to support firms hit by the coronavirus outbreak. “We will support qualified firms so that they can resume work and production as soon as possible, helping maintain stable operations of the economy and minimising the […]

At least 20 people were killed and 48 injured when a blast hit the Hazarganji market in Quetta, Pakistan, on Friday. Nine people from the Hazara community and one Frontier Corps soldier were among the dead. Prime Minister Imran Khan tweeted that he was deeply saddened by the attack. “I have asked for an immediate […]