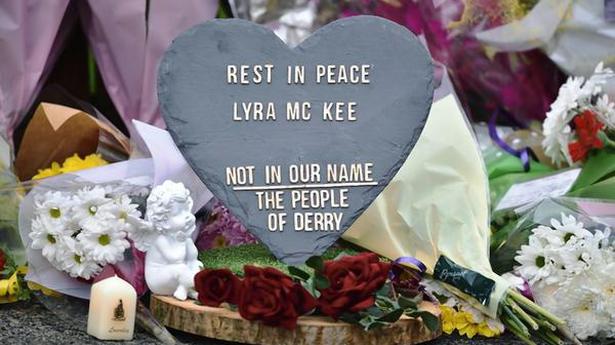 Two men have been arrested in Northern Ireland over the killing of a journalist during a riot, police said, with politicians calling for calm after the shooting added to concerns about the stability of the region’s 21-year-old peace deal.

Lyra McKee was shot dead on Thursday as she watched Irish nationalist youths attack police following a raid. Her death, which follows a large car bomb in the city in January, raised fears that small marginalised militant groups are trying to exploit political tensions caused by Britain’s decision to leave the European Union.

Northern Ireland’s political parties issued a joint call for calm. “Lyra’s murder was an attack on all the people of this community, an attack on the peace and on the democratic processes,” leaders of the main six parties said in a statement. “This is a time for calm heads.”

McKee was watching with a crowd of bystanders as local youths attacked police with petrol bombs and set cars on fire, video footage showed. Police said she was hit when a gunman opened fire in the direction of officers. The Police Service of Northern Ireland said on Saturday that two men, aged 18 and 19, had been arrested under the Terrorism Act in connection with the murder.

It will allow China to operate its national security organs in the city Source: thehindu.com Related

China lashes out at Taiwan over Hong Kong asylum offer

The government of Taiwan, a self-ruled island that China considers its own territory, strongly supports the protests, and Hong Kong students in Taiwan held events over the weekend expressing their backing. Taiwan’s president made the asylum offer last month, though it’s not clear if requests have been received. Taiwan lacks a formal legal mechanism for […]

An 18-year-old Bangladeshi student studying in a madrasa, was set on fire for complaining about being sexual harassed by the school’s principal. The victim went to the police on March 27 to file a report against her principal Maulana Siraj Ud Doula and alleged that he used to called her into his office and repeatedly […]