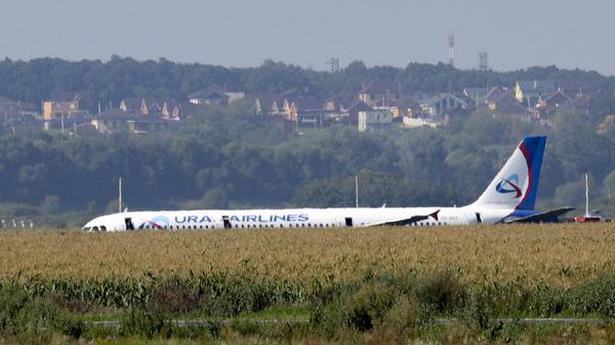 A passenger jet made an emergency landing in a field outside of one of Moscow’s airports on Thursday after colliding with a flock of birds, injuring at least 23 people, Russian officials said.

The Ural Airlines A321 carrying 226 passengers and a crew of seven hit the birds as it took off Thursday from Moscow’s Zhukovsky airport en route for Simferopol, in Crimea.

The airline said in a statement that the birds got into both of the plane’s engines, causing them to malfunction. The pilot then made an emergency landing in a cornfield about 1 kilometer (half a mile) from the airport.

Russian health authorities said 23 people, including five children, were taken to the hospital, and all but one were released following check-ups and quick treatment.

Ural Airlines lauded the crew for its professionalism in arranging the evacuation. The company said the captain is a highly experienced pilot who had flown over over 3,000 hours.

Footage from the scene showed the flight commander directing the passengers to walk away from the plane across the corn field.

China on February 26 reported 52 new coronavirus deaths, the lowest figure in more than three weeks, bringing the death toll to 2,715. All the new deaths were in the outbreak epicentre Hubei province, which accounted for 401 of the 406 new infections reported Wednesday, the National Health Commission said. The number of fresh cases […]

A meeting in prison that kicked up a storm

Damascus said on Thursday it strongly rejects a proposed U.S.-Turkish buffer zone for northern Syria, blaming the “aggressive” project on Syria’s Kurds, who gave the proposal a guarded welcome. Turkish and U.S. officials agreed on Wednesday to establish a joint operations centre to oversee the creation of a safe zone to manage tensions between Ankara […]