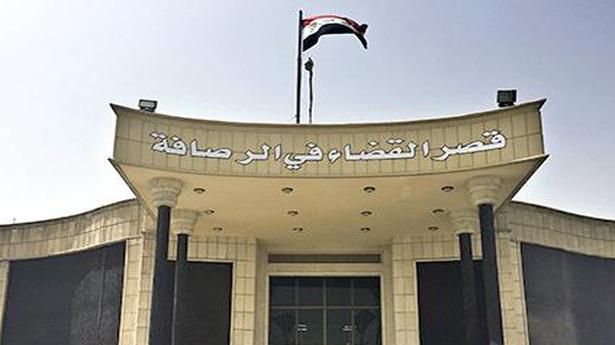 An Iraqi court on Sunday sentenced three French citizens to death after they were found guilty of joining the Islamic State, the first IS members from France to be handed capital punishment, a court official said.

Captured in Syria by a U.S.-backed force fighting the jihadists, Kevin Gonot, Leonard Lopez and Salim Machou were transferred to Iraq for trial. They have 30 days to appeal. Iraq has taken custody of thousands of jihadists repatriated in recent months from neighbouring Syria, where they were caught by the U.S.-backed Syrian Democratic Forces.

The Iraqi judiciary said earlier in May that it has tried and sentenced more than 500 foreign IS suspects since the start of 2018. Its courts have condemned many to life in prison and others to death, although no foreign IS members have yet been executed. The trials have been criticised by rights groups, which say they often rely on evidence obtained through torture.

Those sentenced on Sunday were among 13 French nationals caught in battle-scarred eastern Syria and handed to Iraqi authorities in February on suspicion of being members of IS’s feared contingent of foreign fighters. One was later released as it was found he had travelled to Syria to support the Yazidi religious minorit. The remaining 12 were put on trial under Iraq’s counterterrorism law, which can dole out the death penalty to anyone found guilty of joining a “terrorist” group.

Gonot, who fought for IS before being arrest in Syria with his mother, wife, and half-brother, has also been sentenced in absentia by a French court to nine years in prison, according to the French Terrorism Analysis Center (CAT). Machou was a member of the infamous Tariq ibn Ziyad brigade, “a European foreign terrorist fighter cell” that carried out attacks in Iraq and Syria and planned others in Paris and Brussels, according to U.S. officials. Lopez, from Paris, travelled with his wife and two children to Mosul in northern Iraq before entering Syria, said French investigators.

Iraq declared victory over IS in late 2017 and began trying foreigners accused of joining the jihadists the following year.

Baghdad has offered to try all foreign fighters in SDF custody — estimated at around 1,000 — in exchange for millions of dollars, Iraqi government sources have told AFP.

Among those sentenced to life in prison are 58-year-old Frenchman Lahcen Ammar Gueboudj and two other French nationals.

Iraq has also tried thousands of its own nationals arrested on home soil for joining IS, including women, and begun trial proceedings for nearly 900 Iraqis repatriated from Syria.

The country remains in the top five “executioner” nations in the world, according to an Amnesty International report in April.

The number of death sentences issued by Iraqi courts more than quadrupled between 2017 and 2018, to at least 271.

But only 52 were actually carried out in 2018, according to Amnesty, compared with 125 the year before.

Analysts have also warned that prisons in Iraq have in the past acted as “academies” for future jihadists, including IS supremo Abu Bakr al-Baghdadi.

Canada has recorded its first death from COVID-19, health officials in the westernmost province of British Columbia announced on March 9. The victim, a man living at an elderly care facility, “was infected with COVID-19 (and) passed away last night,” the province’s health officer Bonnie Henry told reporters. Officials have not released the victim’s age. […]

Coronavirus | Loss of smell in some cases might be a new way to detect the virus, experts say

From a mother unable to smell her baby’s nappy to a lawmaker who suddenly could not taste food, some COVID-19 patients have described a loss of olfactory senses — and experts say this might be a new way to detect the virus. Ear, nose and throat (ENT) specialists in Britain, the U.S. and France have […]