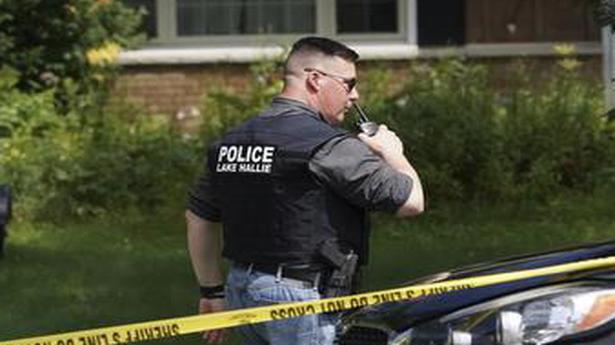 A shooter killed three family members at a home in a small Wisconsin town, then went to a residence in a nearby community and opened fire on more people, sheriff’s officials said Monday.

The shootings some 14.5 km apart in northwestern Wisconsin left a total of five people dead, including the suspect, and two others wounded, authorities said.

Authorities found the shooter and another person dead while responding to a 911 call in Lake Hallie in about 10-30 p.m. Sunday, Sheriff James Kowalczyk told WQOW-TV. Authorities said the dead were a man and a woman, but Kowalczyk didn’t say which one was the shooter or how authorities were able to determine who the shooter was.

Two other adults at the home in Lake Hallie were rushed to the hospital with gunshot wounds. There was no immediate word on their conditions.

Authorities looking to notify the shooter’s relatives then went to a home in the Town of Lafayette around 2-30 a.m. Monday and discovered three more bodies, Kowalczyk said.

“We went to the door, received no answer, attempted to make a call, again no answer. We finally forced our way in and found three other victims of a homicide,” Kowalczyk said.

The dead there were a man, a woman and a boy.

The names of the victims and the shooter have not been released. Kowalczyk told WQOW that authorities were still trying to determine a motive. The sheriff didn’t immediately return a phone message left by .

Lafayette Chairman Dave Staber said the shooting in his town has rocked the normally quiet, bedroom community of 6,000.

“We’re seldom in the news, which is just the way we like it. My heart goes out to the residents affected by this,” Staber said.

Demonstrators march in Hong Kong in new weekend of protest

The march by several thousand people in Tuen Mun on Hong Kong’s northwest was relatively small compared with previous weekends. There was no violence, in contrast to previous protests that included clashes with police. Elsewhere, Hong Kong media reported scuffles as government supporters heeded a call by a pro-Beijing politician to tear down protest posters […]

U.S. President Donald Trump was ambiguous about whether a trade deal with India was imminent and larger trade deal was in the works for later, potentially after the U.S. elections in November. Mr. Trump’s comments come days after U.S. Trade Representative (USTR) Robert Lighthizer cancelled a trip to India – as reported in The Hindu […]

The world’s largest aircraft, developed by aerospace venture Stratolaunch, completed its first flight test on Saturday. With a dual fuselage design and wingspan greater than the length of an American football field, the airplane took off from Mojave Air and Space Port in California at 6:58 am (Pacific Time), said Stratolaunch in a statement, Xinhua […]