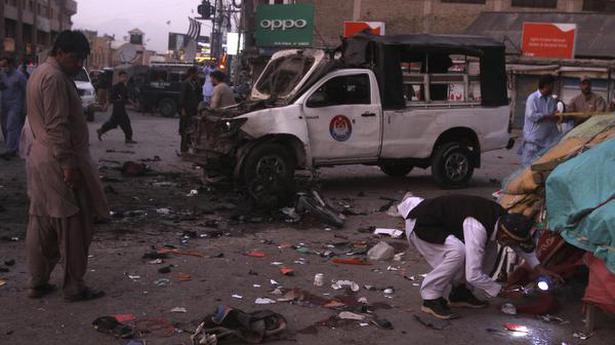 Five people, including two cops, were killed and 38 others injured on July 30 in a powerful blast targeting a police vehicle in Quetta, the largest city of Pakistan’s troubled Balochistan province.

The blast took place close to a police vehicle at the Bacha Khan Chowk in the remit of the City Police Station, Quetta’s Deputy Inspector-General of Police Abdul Razzaq Cheema said. The target of the blast appeared to be the Station House Officer (SHO) of the area but he had escaped with injuries and had been shifted to hospital, the DIG told reporters. “The bomb went off as soon as SHO Shaffat got down from his vehicle,” he said. The condition of the SHO is said to be critical.

Cheema said it was too early to confirm whether it was a suicide attack or the blast was caused by a remotely triggered device. Earlier, police officials had said terrorists had planted explosives in a motorcycle and parked it near the police vehicle before it was detonated.

A contingent of law enforcement agencies threw a security cordon around the area as rescuers continued evacuations. No one immediately claimed responsibility for the deadly attack.

The injured and bodies of the dead were shifted to the Civil Hospital, where officials confirmed the death toll. The impact of the blast was so strong that it shattered the glass windows of nearby shopping malls and damaged parked vehicles and motorcycles.

Home Minister Mir Zia Langove said the government would not be cowed down by such attacks and the mission to purge the province of the menace of terrorism would continue.

New Zealand will ban military-style semi-automatics (MSSA) and assault rifles under tough new gun laws, Prime Minister Jacinda Ardern said on Thursday. The decision follows the killing of 50 people in the country’s worst mass shooting by a gunman at two mosques in Christchurch on March 15, Friday last.  Ms. Ardern said she expected the […]

A Maldivian court on Sunday ordered the authorities to lift a freeze on former President Abdulla Yameen’s bank accounts holding about $6.5 million but said a money laundering case against him would proceed. The High Court overturned the Criminal Court’s earlier decision to freeze the eight accounts over allegations that Mr. Yameen had received illicit […]

Floods sparked by torrential rains have killed 29 people in Indonesia with a dozen more still missing, officials said on Monday, marking the latest calamity for a disaster-prone nation. Landslides and floods are common, especially during the monsoon season between October and April, when rains lash the vast Southeast Asian archipelago. On Monday, Indonesia’s disaster […]